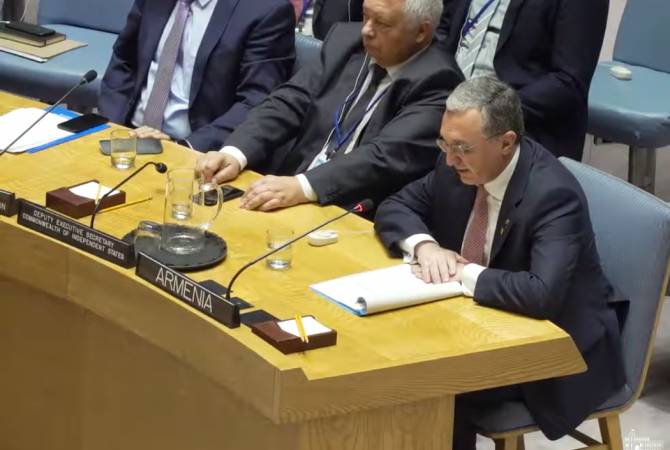 
YEREVAN, SEPTEMBER 26, ARMENPRESS. Zohrab Mnatsakanyan, Minister of Foreign Affairs of Armenia, delivered remarks at the UN Security Council meeting on “Cooperation of the United Nations with Regional and Sub-Regional Organizations for the Maintenance of International Peace and Security: The Contribution of CSTO, CIS and SCO in Countering Terrorism Threats”.

Armenpress presents the full text of the FM’s speech:

“I would like to thank the Russian Federation for convening today’s debate. This meeting is an important opportunity to recommit to effective cooperation in countering terrorism, the scourge of which has become more diffuse with an increase of terrorist acts, including those motivated by intolerance or extremism․

No country in the world is immune to terrorism. The international community should stand united and work hand in hand to counter terrorism in all its dimensions. Any attempts to justify inspirers or perpetrators of terrorism or violent extremism, as well as those inciting hate crime and violence, especially in conflict environment, should be decisively and unequivocally condemned, at all levels.

Armenia remains a staunch advocate of enhanced international collaboration to combat terrorism, regardless of geography, underlying motives or narratives. It is our deep conviction that terrorism should not be associated with any particular civilization, religion, nationality or ethnic group. We are gravely concerned by the instances whereby entire communities are deliberately targeted for the mere fact of belonging to a particular ethnic or religious community. The meticulously planned acts of barbarism and vandalism against cultural monuments as well as annihilation of several world heritage sites in Iraq and Syria represent a case in point and a matter of serious concern for the humanity.

Armenia was among the first member states to resolutely condemn persecution of civilian population perpetrated by ISIL, Al-Nusra Front, Al-Qaida and their affiliates. The brutal crimes against the Armenian population in the Syrian cities of Kessab and Deir-ez-Zor, the deliberate destruction of cultural and religious monuments and mass atrocities committed by ISIS and Al-Nusra terrorists have demonstrated that terrorism is, essentially, a manifestation of fundamental denial of human rights. Armenia has demonstrated consistent commitment to help bring lasting change in the areas affected by the crisis, as reflected through the deployment of our national humanitarian mission in Syria, in response to the request of the Syrian authorities and the Armenian community in Syria.

Armenia remains firmly committed to the global fight against terrorism and is actively engaged in international and regional activities to this end. We highly value the existing cooperative platforms aimed at amplifying our national efforts and improving bilateral dialogue to prevent and counter terrorism. Armenia continues its thorough implementation of the counter-terrorism conventions and their additional protocols, as well as the relevant resolutions adopted by the UN Security Council.

The recent visit conducted by the Counter-Terrorism Committee Executive Directorate (CTED) to Armenia highlighted our country’s progress in addressing terrorism-related challenges, including through effective international cooperation. Following the recommendations contained in the report of the CTED, the process of establishing and applying Advance Passenger Information System has been launched already in Armenia.

The regional and sub-regional organizations have a pivotal role to play in promoting and facilitating cooperation, including through sharing best practices and building stronger capacities to effectively address the threats of terrorism. We place significant priority to the ongoing activities conducted in partnership with the Antiterrorism Center of the CIS and the relevant structural units of the CSTO.

The competent authorities of Armenia continue to contribute to the effective implementation of the CIS Programme of Cooperation for 2017-2019 on countering terrorism and other violent manifestations of extremism. Representatives of national security agencies, special services and law enforcement bodies have consistently participated in the joint counterterrorism exercises of the CIS under the general coordination of the Anti-Terrorism Center of the CIS. As we speak, the two final stages of the “Ararat-Antiterror 2019” exercise are being carried out in Armenia, with the participation of the competent state security agencies from seven countries of the CIS including Armenia, Belarus, Kazakhstan, Kyrgyzstan, Russia, Tajikistan and Uzbekistan). Armenia is actively engaged in the regularly conducted joint operations of the CSTO Member States «Канал», «Нелегал» and «Прокси» as well as in the joint counter-terrorism exercises of the CIS conducted under the coordination of the Anti-Terrorism Center of the CIS.

Armenia attaches equally high importance to its work within other regional and sub-regional organizations to which it is member, or with which it has close co-operation. As a dialogue partner of the Shanghai Cooperation Organization (SCO), we are looking forward to further expanding the agenda of our partnership and taking our dialogue forward. Against the backdrop of the current international agenda with proliferating threats, challenges and conflicts, co-operation among states from sub-regional to regional to global levels has been and remains relevant as ever in helping identify common solutions and sustainable dialogue for the maintenance of international peace and security”.

11:29, 05.19.2022
2929 views U.S. recognizes role of population of Nagorno-Karabakh in deciding its future–Ambassador Tracy’s interview to ARMENPRESS