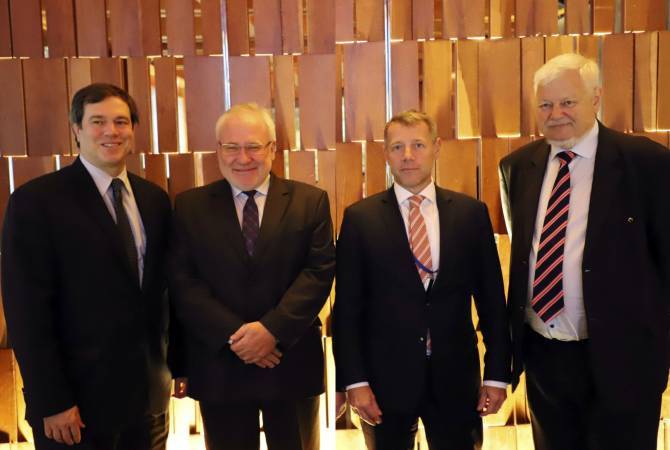 
YEREVAN, SEPTEMBER 26, ARMENPRESS. The Co-Chairs of the OSCE Minsk Group - Igor Popov of the Russian Federation, Stéphane Visconti of France, and Andrew Schofer of the United States of America issued a statement based on the results of the meetings held separately and jointly with Azerbaijani Foreign Minister Elmar Mammadyarov and Armenian Foreign Minister Zohrab Mnatsakanyan on the margins of the UN General Assembly, Armenpress reports citing the OSCE website.

The Co-Chairs were joined in their meetings by the Personal Representative of the OSCE Chairperson-in-Office, Andrzej Kasprzyk.

The Co-Chairs briefed the two Ministers on their activities since the joint meeting in Washington in June, including recent consultations in Paris and Geneva on the humanitarian and security dimensions of the conflict.

The Co-Chairs noted the positive effects of the sides’ efforts to minimize violence during the summer period, including the use of the existing direct communication links, and expressed deep regret over the recent fatality.

The Co-Chairs and the Ministers continued their discussion of additional measures to reduce tensions and sustain an atmosphere conducive to peace and favorable to substantive talks. Recalling their 9 March statement, the Co-Chairs encouraged the sides to minimize the use of rhetoric that is inflammatory or prejudges the outcome of negotiations.

The Co-Chairs intend to visit the region in the near future.