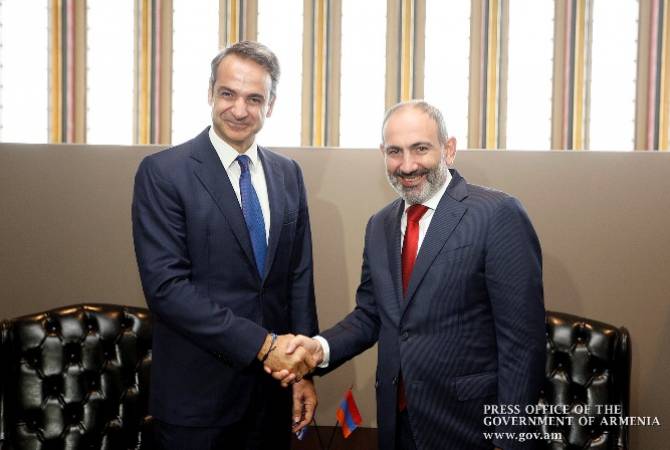 Greeting the Greek Prime Minister, Prime Minister Pashinyan said Armenia prioritizes the partnership with Greece both in the bilateral format and within the European Union. According to Nikol Pashinyan, the friendly relations between the two countries and the high-level political dialogue constitute a solid basis for the development of mutually beneficial cooperation in the economic and other fields.

Noting that he was happy to meet with the Armenian counterpart, the Greek Prime Minister stated that the Armenian and Greek nations are bound by deeply-rooted historical ties and the ongoing high-level political dialogue should be used to boost cooperation in other areas as well.

Nikol Pashinyan and Kyriákos Mitsotákis discussed issues relating to the development of bilateral cooperation, the possibilities of intensifying economic ties. They took the opportunity to exchange views on the economic situation and the expected dynamics.

The interlocutors stressed that there is considerable economic potential and efforts should be made to tap it in full. They emphasized that Yerevan-Athens direct air communication promotes trade, economic exchanges and tourism.

In the context of establishing closer contacts between the respective business communities, the importance of joint business forums was highlighted on both sides. The parties also discussed cooperation between the defense ministries of both countries.

The interlocutors discussed issues concerning the ratification of the Comprehensive and Enhanced Partnership Agreement between Armenia and the EU (CEPA). Prime Minister Pashinyan said 17 EU member states have already ratified the agreement. He asked the Greek Prime Minister to possibly get the CEPA ratified as soon as possible and support the entry into force of the Agreement.

The Prime Ministers of Armenia and Greece also exchanged views on the launch of the visa liberalization process.

The Armenian Prime Minister appreciated Greece’s balanced position in the process of peaceful resolution of the Nagorno-Karabakh conflict. The Greek Premier expressed gratitude for Armenia’s support of the efforts exerted by Greece and Cyprus to solve the Cyprus problem.

Later today, Prime Minister Pashinyan attended the opening of the High Level Political Forum on Sustainable Development as part of the 74th session of the United Nations General Assembly.