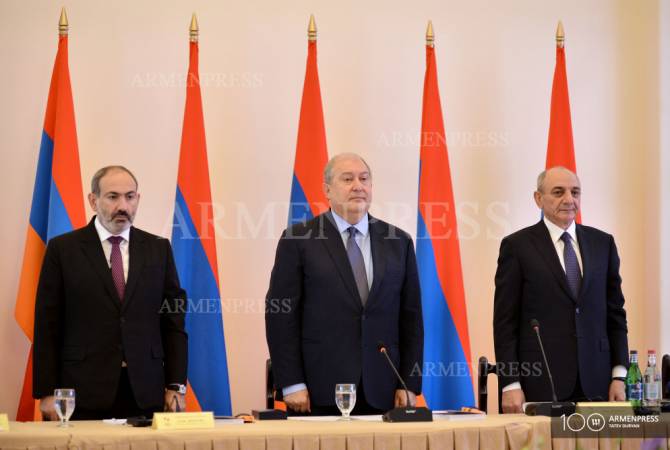 
YEREVAN, SEPTEMBER 20, ARMENPRESS. Artsakh Republic President Bako Sahakyan sent a congratulatory letter to Premier of the Republic of Armenia Nikol Pashinyan and President Armen Sarkissian on the occasion of the Independence Day.

As ARMENPRESS was informed from the press service of ARtsakh President's Office, the letter to PM Pashinyan reads:

On behalf of the people, authorities of the Artsakh Republic and myself personally I would like to extend my most heartfelt congratulations to You on the 28th anniversary of the independence declaration of the Republic of Armenia.

The 21st of September 1991 became the most significant starting point for the Armenian people, the foundation of a new path – that of building a sovereign and democratic state, based on national and universal human values.

Every Armenian must always keep in mind the idea of Homeland, contribute to the patriotic mission of cementing the independent Armenian statehood. Respected Premier Pashinyan, I congratulate You and all our people once again on this memorable holiday and wish peace, great success and victories for the good and well-being of the Republic of Armenia.”

“Honorable Mr.Sargsyan, On behalf of the Artsakh people, authorities and myself personally I extend my cordial congratulations to You on the 28th anniversary of the Independence Day of the Republic of Armenia, a holiday that fundamentally changed the course of the Armenian history.

It is the duty of every Armenian to do everything possible for consistent development and strengthening of the independent Armenian statehood. You have had a great personal contribution to this process.

I wish You peace, robust health and great success on the way of carrying out Your patriotic mission”.