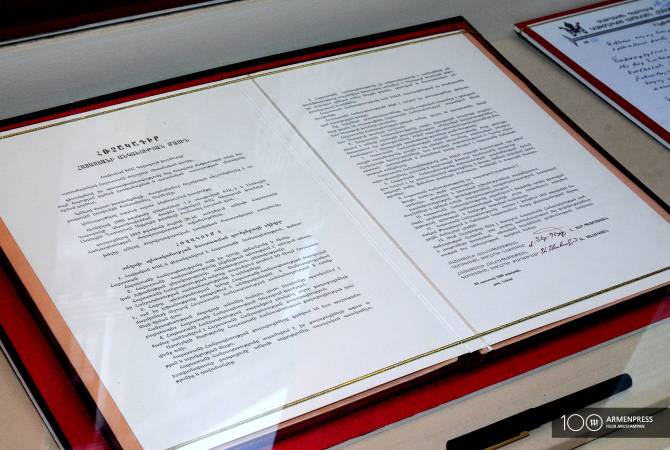 
YEREVAN, SEPTEMBER 21, ARMENPRESS. In the Third Republic hall of the History Museum of Armenia, the silent, but at the same time the spoken witness of Armenia’s independence – the Declaration of Independence, is attracting many tourists.

Seda Galstyan, head of the department of new and modern history at the Museum, who also played a key role on bringing the Declaration to the Museum, gave an interview to ARMENPRESS on the topic.

“The original of the Declaration has been donated by the Presidential staff in 1996. When the independence process started, I thought that we should definitely have the samples. For that purpose we made efforts, I personally contacted the chief of the presidential staff, explained how it’s important for us to display the original in the Museum, although the hall was not ready yet. And they reacted to my proposal very positively, because they understood its necessity”, Galstyan said.

She said tourists are quite interested in this Declaration. “This is our last hall, when people visit here, they tour the Hall with another interest because this is already the history of the modern era”, she said.

The voting ballot of the September 21, 1991 referendum is also displayed near the original of the Declaration.

Today, the Third Republic of Armenia is celebrating its 28th anniversary of Independence.