Armenian FM meets with his Latvian counterpart in Riga 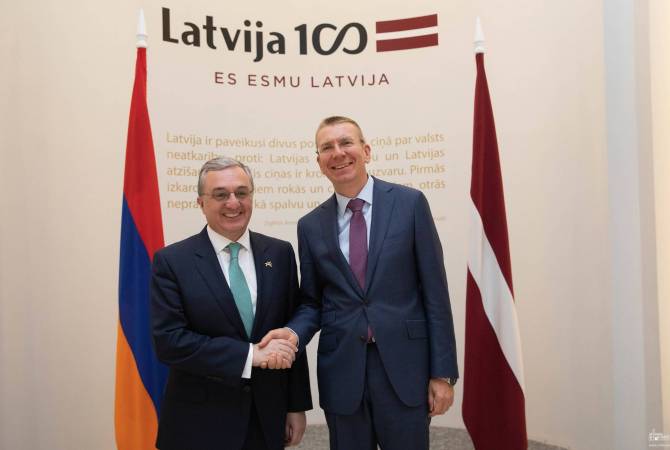 As ARMENPRESS was informed from the press service of the MFA Armenia, thanking for the warm reception, Minister Mnatsakanyan expressed confidence that his visit will foster the future development and strengthening of relations between the two states and two peoples that have great respect towards each other.

The FMs recorded with satisfaction that Armenia and Latvia have a successful experience of cooperation and will continue mutual efforts to further expand mutual agenda.

The Armenian Foreign Minister spoke about the reform process launched in Armenia, pointing out judicial reforms as a priority.

In the context of Armenia-EU cooperation Zohrab Mnatsakanyan highlightedd the role of the Comprehensive and Enhanced Partnership Agreement.

FM Mnatsakanyan noted that Armenia prioritizes the launch of the dialogue on visa liberalization and highly appreciated the support of Latvia in that issue.

The sides exchaged views on regional and international agenda.

Minister Mnatsakanyan presented to his colleague the position and approach of Armenia on NK conflict settlement.

After the meeting the Foreign Ministers gave a joint press conference.

The Armenian and Latvian FMs visited the Freedom Monument and laid fllowers.