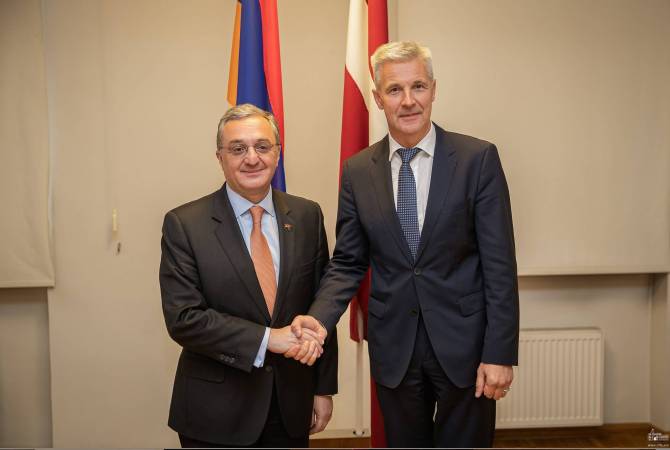 
YEREVAN, SEPTEMBER 18, ARMENPRESS. Armenian Minister of Foreign Affairs Zohrab Mnatsakanyan had a meeting with Latvian Deputy Prime Minister and Defense Minister Artis Pabriks in Riga during his official visit to the country.

According to a news release issued by the Armenian foreign ministry, the sides spoke highly about the dynamically developing Armenian-Latvian relations and reiterated mutual willingness to make efforts for the full utilization of untapped potential of partnership and greater expansion of the bilateral agenda.

“The parties noted that the Armenian-Latvian relations are based on mutual respect and mutual understanding and outlined future actions in the direction for boosting dialogue in different levels,” reads the news release.

Speaking about defense cooperation Mnatsakanyan said that an effective cooperation agenda exists with both NATO members and other states, the moving force being the Armenia-NATO Individual Partnership Action Plan.

The participation of Armenian peacekeepers in Afghanistan and Kosovo was highly appreciated at the meeting.

FM Mnatsakanyan reiterated Armenia’s readiness to continue and enhance its contribution to international efforts of preserving peace and humanitarian actions. At the request of the Latvian Deputy PM, Mnatsakanyan briefed on Armenia’s foreign policy priorities and positions regarding a number of issues of the regional agenda. Speaking about the NK conflict peaceful settlement process in the OSCE MG Co-Chairmanship format the Armenian FM presented the Armenian side’s approach and stances by highlighting the importance of developing and strengthening of an atmosphere conducive to peace.