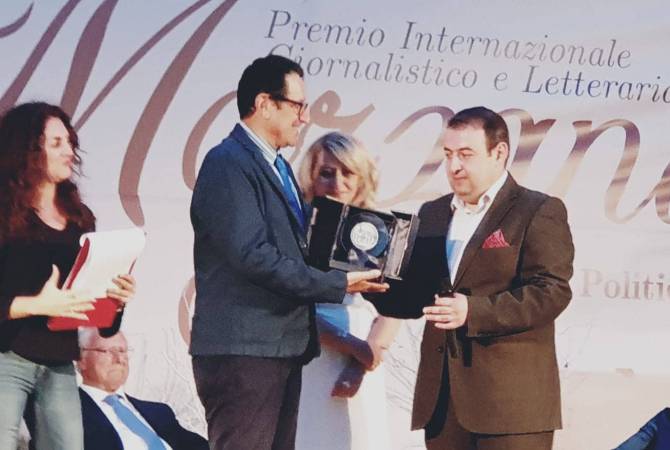 
BENEVENTO, SEPTEMBER 16, ARMENPRESS. The Armenian Cause has been enriched with a new content: it should be pushed forward with “never again” content, by considering unacceptable the crimes against humanity in any part of the world, Aram Ananyan – Director of ARMENPRESS state news agency said in his remarks during the discussion held on the sidelines of the Creative Mind Festival and the Marzani International Award for Journalism and Literature in the Italian city of Benevento.

In his speech ARMENPRESS Director Aram Ananyan said war is not an abstract phenomenon in the history of the Armenian people for the past hundred years: it’s part of everyone’s biography. “For us the First World War was the survival of the Armenian Genocide. The Armenian people considered the Second World War as their war because more than half of Armenians have not returned from the battlefield, but the Artsakh heroic war was the marking of our people’s fight for freedom. Only those nations who deeply perceive the threat of war can understand the meaning of peace”, he said.

Aram Ananyan considered symbolic the fact that the Bari city is located several hundred kilometers away from the square of that Italian city and has become the shelter of hundreds of Armenian Genocide survivors. “My Lebanese colleagues are on this stage who represent a country which became a second homeland for tens of thousands of our compatriots. ARMENPRESS and I receive an award for covering the topic of the Armenian Genocide, the Armenian Cause and humanitarian issues. In my modest opinion, the Armenian Cause has been enriched with a new content: this content should be the perception of the impermissibility of crimes against humanity in any part of the world”, he added.

Aram Ananyan received the Marzani International Award for Journalism and Literature and thanked both the organizers and the team of ARMENPRESS. “Our commitment directed for humanity and prevention of crimes against humanity will continue”, Aram Ananyan said.

Politicians, journalists, representatives of music, cinema and science are among the laureates. Only three of them, Aram Ananyan, Sevak Hakobyan and Laura Suleyman, represent other countries, but the rest are Italians.

Zartonk editor-in-chief Sevak Hakobyan said quite often the news agencies in the new history were used for provoking war and spreading hatred. “It’s necessary to get out of this culture and serve the news agencies for quite the opposite goals”, he said.

As for the Armenian Genocide, Hakobyan said he doesn’t want the Armenian people to be presented only as a sacrifice of the genocide. “I also address this message to those present. The Armenian people have virtues to remember, before the image of a sacrifice of genocide, we are Christians before Vatican, our kings have quite often allied with European leaders while making achievements. Our women received the right to vote first rather than many European countries”, Sevak Hakobyan said.

Since 2008, Campania’s (Italy) Europe-Mediterranean Association (Associazione Campania Europa Mediterraneo) is organizing the Creative Mind Festival in Benevento to bestow the Marzani International Award for Journalism and Literature to honor creative minds from all over the world who have dedicated their work of universal value to presenting the truth to the people. The event is organized under the auspices of the Italian Chamber of Deputies, the Senate and the Ministry of Foreign Affairs in cooperation with the Benevento City Hall. Politicians, statesmen and public figures from all over Europe are participating in the festival. Italy’s Minister for European Affairs will also attend this year’s awarding ceremony.