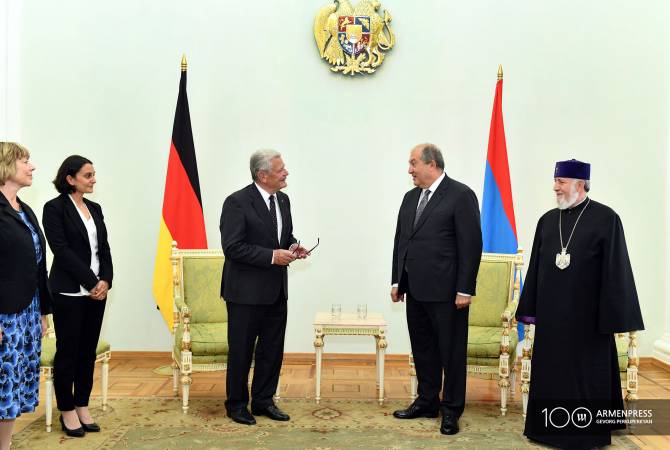 The meeting was also attended by His Holiness Garegin II, Supreme Patriarch and Catholicos of All Armenians.

Welcoming the guest the Armenian President thanked him for his humanitarian activity and highly appreciated Mr. Gauck’s great contribution to the recognition of the Armenian Genocide. The President said Armenia and Germany have long history of friendship and cooperation, adding that Germany and the German companies can view Armenia as a gate to the Eurasian Economic Union (EAEU). President Sarkissian highlighted the presence of broad cooperation opportunities in the fields of culture, science and technologies. “I would like the major German international companies to cooperate with Armenia in IT, artificial intelligence and mathematics spheres”, the President said.

Talking about the cultural cooperation opportunities, the Armenian President noted: “From cultural perspective I think we can cooperate within the frames of our presidential initiative, that is the presentation of cultures of different countries at the Presidential Palace during which the visitors will be able to see not only the Presidential residence, but also to get acquainted with the history and art of different nations”.

“I am very happy for the fact that I meet a president in the person of you in the region who comes from the scientific circle. I have an honor to be here today. I heard that Armenia closely followed my speech on the Armenian Genocide at the Mother Cathedral of Berlin, and I am also grateful that I can get acquainted with your country, your people and culture not from the distance, but closer”, the former German President said.

During the meeting the sides also exchanged views on Armenia’s development prospects, the Armenian-German relations and the Armenia-EU partnership.