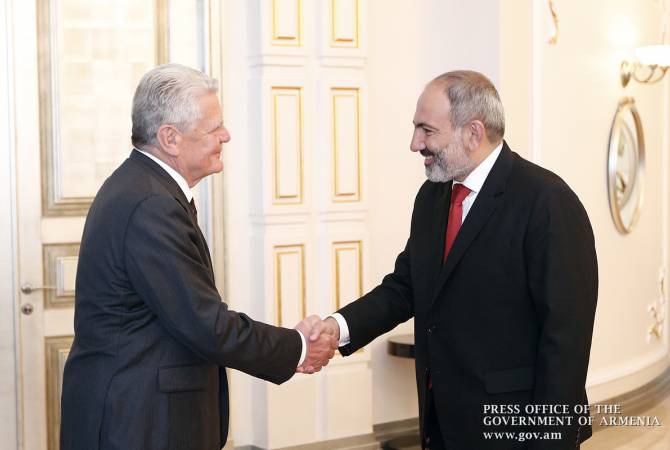 
YEREVAN, SEPTEMBER 16, ARMENPRESS. Prime Minister of Armenia Nikol Pashinyan met with former President of Germany Joachim Gauck who is in Armenia on a private visit, the PM’s Office told Armenpress.

Welcoming Mr. Gauck’s visit to Armenia, the PM said he is happy to host him here. “You are perceived in Armenia as a friend of the Armenian people, and this is not accidental and is connected with your activities. We have recorded that your statement in 2015 on the Armenian Genocide became the starting point as a result of which the German Bundestag adopted a resolution on the recognition of the Genocide”, the PM said, highlighting the former German President’s activity also in the human rights field. Pashinyan said as a result of the 2018 peaceful, velvet and democratic revolution serious democratic changes are taking place in Armenia. “Now many people ask how the revolution took place with no casualties. The answer is simple: our revolution was based on Christian values which allowed to make changes without shocks”, the PM said.

Coming to the Armenian-German relations, Pashinyan praised the fact that they are developing dynamically, high-level mutual visits have taken place in the past one year. As a result the PM highlighted the drastic growth in number of German tourists. “I attach importance to the human care shown by the German Chancellor to the ongoing changes in Armenia, which adds an important factor to the Armenian-German relations. I am convinced that your visit will further improve the relations of our countries”, Nikol Pashinyan said.

In his turn Joachim Gauck thanked for the warm welcome. “For us it’s very important that the fact of the Armenian Genocide is deeply perceived among the German public. The important is the recording of the events of the past. We are impressed with the fact that fundamental changes are taking place in Armenia aimed at building a legal state based on democratic values”, he said, adding that Armenia’s historical mission should be to build a real democracy in this region. He said the EU has a political will to support the development of Armenia’s legal system and strengthen the rule of law in the country.

In his turn PM Pashinyan added that the greatest mission of his government is the change of fate of Armenia and its people.

During the meeting the sides also exchanged views on issues relating to the Armenian-German relations and the Armenia-EU partnership.