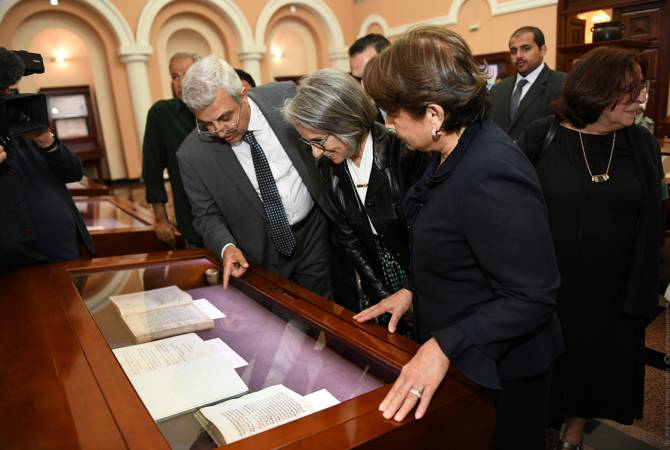 Mrs. Nouneh Sarkissian and the Sheikha of Kuwait toured the exhibition halls of the Institute. The Kuwaiti delegation paid a great attention especially to the displayed Islamic manuscripts.

Secretary General of Kuwait’s National Council for Culture, Arts and Letters Kamel Al-Abdeljaleel said the main purpose of their visit to Armenia is to boost the deepening of cultural relations. “We met with President of Armenia Armen Sarkissian, and encouraged by this visit we are developing many cooperation programs. We are going to implement two major projects with Armenia: the Museum of Islamic Antiquities operates in Kuwait which keeps the greatest and the most ancient pieces of Islamic culture and art. We should bring some of these exhibits to Armenia. We also think of displaying the oldest Arabic and Islamic manuscripts here.

In addition, we also plan to organize cultural weeks – an Armenian cultural week in Kuwait and vice versa”, the Secretary General said, adding that there is a great cooperation potential with the Matenadaran. “We have many modern equipment which enable us to digitize the ancient books and keep them in a right way”, Kamel Al-Abdeljaleel said.