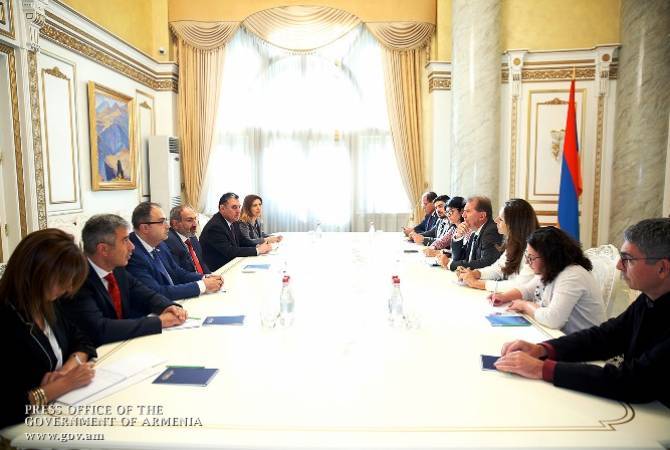 As ARMENPRESS was informed from the Office of the Prime Minister of Armenia, Nikol Pashinyan welcomed the guests and emphasized that they have a great contribution to the development of Armenian-French friendship and the just solution of the Artsakh issue.

“We highly appreciate your activities that displays the unique relations between Aremenia and France. We are thankful for your support to the protection of the eights of the people of Artsakh, for your consistency and resolve. With your activities you greatly contribute to the peaceful solution of Artsakh issue and the preservation of peace and stability in the region'', Nikol Pashinyan said.

Gui Tessier thank PM Pashinyan for the high assessment and noted that being the Vice President of the France-Armenia Friendship Group  for nearly 30 years, he continues working for the strengthening of the Armenian-French relations with great passion. He referred to the visit of the French parliamentarians to Artsakh a few days ago and shared with his impressions. He noted that the people of Artsakh have the will to raise their voice and determination to live in peaceful conditions and the members of the France-Artsakh Friendship Circle will continue to visit Artsakh aimed at supporting the peaceful solution of the issue.

Gui Tessier said that the French people follow the democratic development in Armenia and have a deep respect towards those developments. In this context he spoke about the Comprehensive and Enhanced Partnership Agreement (CEPA) between Armenia and the EU and expressed readiness to support the implementation of the CEPA in the sidelines of the Armenian-French inter-parliamentary cooperation.

The PM highlighted the support of Armenia's European partners, including France, to the democratic reforms in Armenia and also highlighted the launch of visa liberalizations talks.

PM Pashinyan answered a number of questions of the French parliamentarians, which were about the reforms in the country, the involvement of women in the social-political life and fostering their economic activities, the integration of Syrian-Armenians in Armenia and so on.