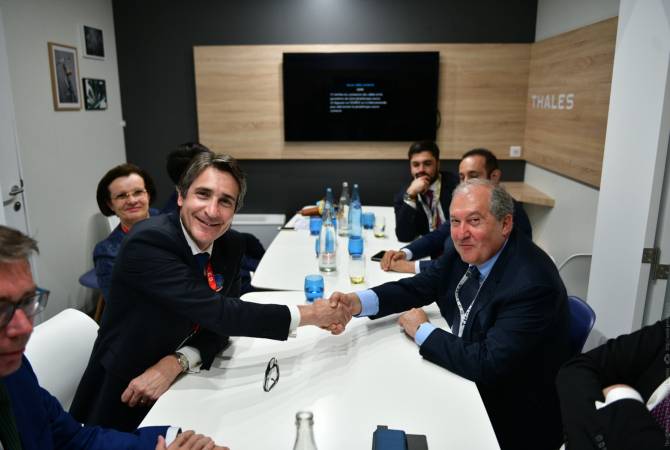 
YEREVAN, SEPTEMBER 4, ARMENPRESS. The delegation of THALES Group, one of the world’s leading French companies providing services for the aerospace, defense, transportation and security markets, arrived in Armenia at the invitation of President Armen Sarkissian, the President’s Office told Armenpress.

The cooperation with this leading French and European technological company started in September 2018 when the Armenian President was in France and met with the company executives. Later in November 2018 President Sarkissian also visited the company’s digital production unit, got acquainted with its activity and ongoing projects, as well as discussed issues relating to the possible cooperation directions. Based on the agreement reached with the Armenian President, the company’s high-ranking delegation this year in June participated in the Armenian Summit of Minds in Dilijan.

In June 2019, the Armenian President was attending the International Paris Air Show at Le Bourget within the frames of which he visited the pavilion of THALES Group. During the visit an agreement was reached to organize the visit of the company’s representatives to Armenia, as well as form working groups to examine the already prepared documents on concrete directions of mutual partnership. In particular, the cooperation and the implementation of joint projects in the fields of artificial intelligence, digital data management are prospective.

During the visit in Armenia the company’s delegation will meet with Minister of High Technological Industry Hakob Arshakyan, Minister of Education, Science, Culture and Sports Arayik Harutyunyan. The company representatives will visit leading technological companies, such as Synopsis Armenia, BetConstruct, TUMO Center for Creative Technologies.