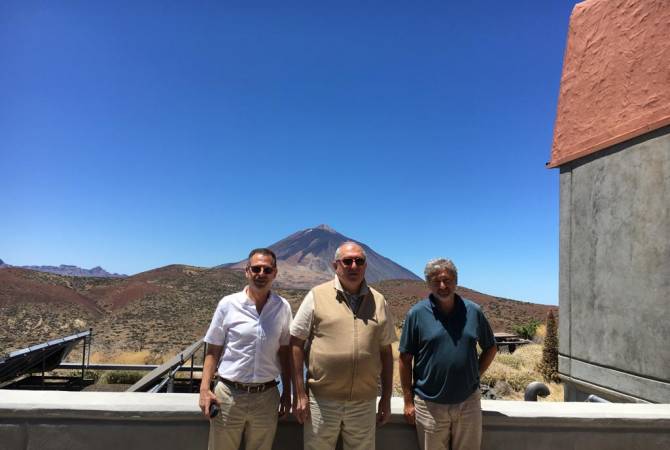 
YEREVAN, AUGUST 14, ARMENPRESS. President Armen Sarkissian has visited the Teide Astronomical Observatory as part of his working visit to Spain.

During a meeting with the observatory’s administration the president discussed prospect of cooperation with Armenia, Sarkissian’s Office said in a news release.

Sarkissian emphasized that “Armenia, as one of the most ancient civilizations in the world, has always paid great attention to the development of science, and also mentioned the Urartu-era observatory of Metsamor.

“I’d like for more Armenians to be involved in science and astronomy in the future. Astronomy isn’t just about telescopes, it is new technologies, mathematical modeling. We have a new presidential initiative called ATOM (Advanced Tomorrow) which is aimed at the development of science and technology in Armenia,” Sarkissian said.

He said Armenia will cooperate with major tech enterprises such as Dassault Systemes, Thales, Leonardo and IBM as part of the project and that a science and technology city will be created. “I think that there are serious opportunities for cooperation also between the observatories of Teide and Byurakan,” he said.

According to the news release Sarkissian will soon sign a memorandum of understanding with the Spanish observatory which will be aimed at developing partnership between Teide and Armenia’s science and technology centers.