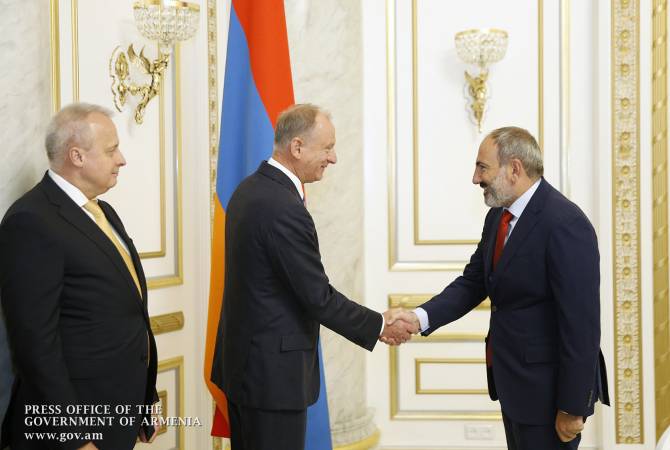 
YEREVAN, AUGUST 13, ARMENPRESS. Prime Minister of Armenia Nikol Pashinyan has held a meeting on August 13 with Secretary of the Security Council of Russia Nikolai Patrushev, the PM’s Office said in a press release.

During the meeting Pashinyan noted that after the Armenian political changes this is the first visit of the Russian Secretary of Security Council and it is a good occasion to touch upon the Armenian-Russian allied relations’ agenda items also in this format.

According to Pashinyan, the strategic cooperation between Armenia and Russia is dynamically developing, and a constructive working atmosphere exists which is corroborated by the frequent meetings with the Russian President and Prime Minister and contacts in other high-ranking levels.

The prime minister attached importance to cooperation between the Security Councils of Armenia and Russia in the context of continuous development of the Armenian-Russian strategic ties and joint work for ensuring regional and international security and stability.

Patrushev conveyed Russian President Vladimir Putin’s and Prime Minister Dmitry Medvedev’s greetings to Pashinyan and noted that he is happy to visit Armenia and to meet with the PM and his counterpart Armen Grigoryan.

He said his consultations with Grigoryan were productive and they’ve discussed cooperation issues in the security sector and touched upon the Armenia-Russia partnership in bilateral and multilateral formats as part of international organizations.

Patrushev said that an assembly of CIS Security Council secretaries is scheduled to take place in November of 2019, and Armenia, as always, has confirmed participation.

The Armenian PM and the Russian Security Council head also exchanged ideas over the NK conflict settlement process, the maintenance of military balance in the region and ensuring stability, as well as development and challenges in regional and international security.