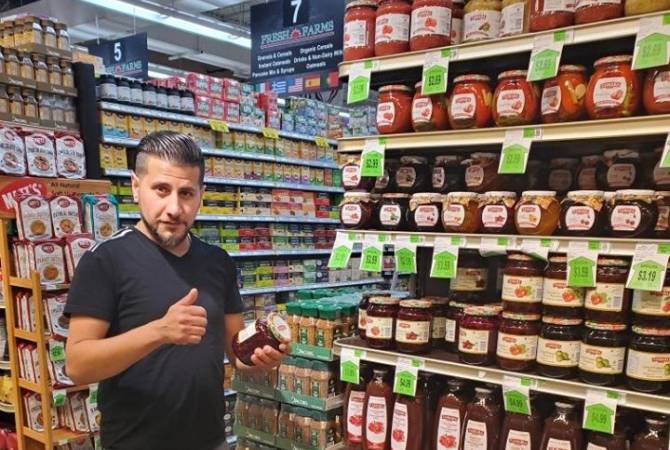 
YEREVAN, JULY 26, ARMENPRESS. It’s already more than 10 days the Armenian canned food products are presented at the Fresh Farms, one of the largest trade network companies in Chicago of the US State of Illinois.

The turnover of the first days has shown that there is an interest towards the Armenian products, Paruyr Sargsyan – Business Armenia’s official representative to Chicago, advisor to the Honorary Consul of Armenia, said in an interview to ARMENPRESS. He greatly contributed to the organization of these works.

“In addition to establishing cultural ties, one of the goals of the Consulate and the Business Armenia is also to deepen the economic ties and import the Armenian goods to Chicago. We held many talks, meetings with the large companies operating in Illinois and reached an agreement with the Fresh Farms to present the Armenian production”, he said, stating that Armenian goods are imported to and sold in Illinois for the first time, moreover, in such a big market.

Paruyr Sargsyan said people in Chicago were aware of the Armenian production to some extent, because migrants from Eastern Europe, including Polish people, Bulgarians, live in that part of the state and are aware of Armenia and its products. Analyzing the sale of the first days, Sargsyan said the ten-day turnover showed that there is an interest, people buy the goods, but not with a large quantity. “Juices are almost sold, but jams and fruit preserves will be sold gradually connected with the season”, he said.

Armenia’s Honorary Consul to Chicago Oscar Tatosyan assisted in organizing the sale of Armenian goods in one more US state. Firstly the products are transported to New York, then are delivered to Chicago. The Armenian goods have been presented in New York long ago, but they are in Chicago for the first time.

Paruyr Sargsyan informed that they are going to expand the representation of the goods in partnership with the Business Armenia, hold talks also with the remaining major American companies for selling the Armenian products.