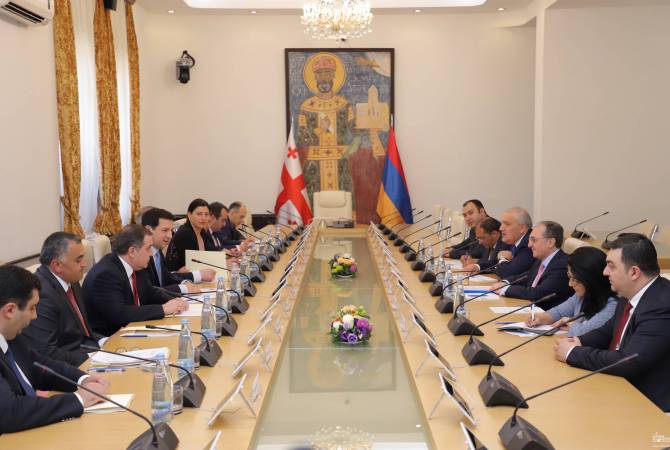 
YEREVAN, JULY 25, ARMENPRESS. Foreign Minister of Armenia Zohrab Mnatsakanyan and his delegation met with Speaker of the Georgian Parlaiment Archil Talakavadze on July 25. Vice President of the Georgian Parliament, head of Georgia-Armenia friendship group George Volsky and other members of the group, as well as chairperson of the foreign relations committee of the parliament of Georgia Sofio Katsarava participated in the meeting.

As ARMENPRESS was informed from the press service of the parliament of Armenia, thanking for the warm reception, Minister Mnatsakanyan reaffirmed Armenia’s commitment to further strengthen the centuries-old friendly relations between Armenia and Georgia. In this context Zohrab Mnatsakanyan and Archil Talakavadze emphasized with satisfaction the active role of parliamentary diplomacy as a productive platform between the legislatives of Armenia and Georgia.

The Armenia FM and the head of the Georgian parliament also highlighted the regular meetings between the parliamentary committees of the two parliaments.

The interlocutors underlined the important role of Georgian-Armenians in the social-political life of Georgia, as well as in terms of bringing closer the two neighboring friendly peoples and countries.

Zohrab Mnatsakanyan and Archil Talakavadze exchanged views on issues of regional stability and security. The Armenian Foreign Minister presented the position and approaches of Armenia in the process of peaceful settlement of Nagorno Karabakh conflict, underlining the importance of relevant atmosphere for achieving progress in the peace process.

At the end of the meeting FM Mnatsakanyan made a note in the book of honorable guests of the Georgian parliament.