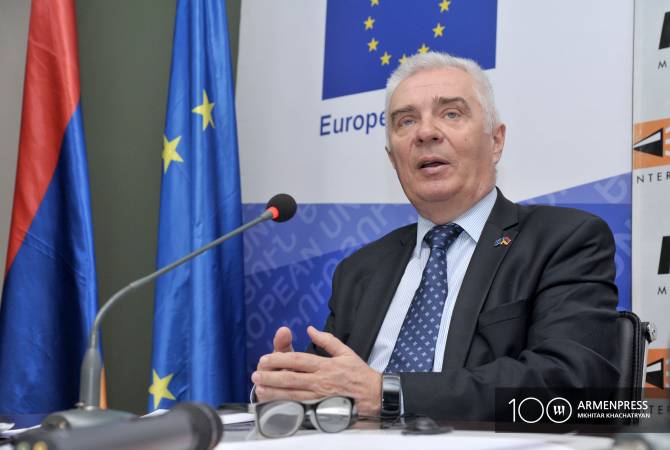 
YEREVAN, JULY 22, ARMENPRESS. The European Union is ready to provide political, consulting and clearly measurable financial support for Armenia’s judicial reforms. The EU will transfer its experience, but will not impose anything, the format of reforms will be determined exclusively by Armenia, Ambassador Piotr Świtalski, Head of the EU Delegation to Armenia, told reporters today, summing up his diplomatic mission in Armenia.

“The EU has come up with a very clear support to Armenia’s judicial reforms. This support as such has been presented to our Armenian partners at various levels, starting from the highest level. I am confident you remember what Donald Tusk said during a conference in Armenia, what he said during the meetings with the Armenian Prime Minister and President. The EU confidently is certainly inclined to the implementation of efforts of the Armenian side in judicial reforms, especially on the path of creating really independent and effective judicial system. We are ready to provide political, consulting and financial support”, he said.

The EU Ambassador also commented on certain reports. He stated that the EU is ready to provide clearly measurable financial support to the judicial reforms process. This issue was discussed several days ago within the frames of a very important mission. “I am confident that our support is very important also from financial perspective”, he said.

At the moment the EU is considering a direct support aimed at implementing the direct plans of the government. “We are also talking about a multi-million support program which is expanded also for the upcoming years within the frames of the budgetary package provided to Armenia. I would like to note that our discussions with the Armenian government, in particular, the justice ministry were very productive and constructive. We are looking forward to concrete plans which the Armenian government outlines at the moment. And we are ready to provide support to Armenia in these plans”, he said.

The Ambassador said the EU is ready to mobilize its force, share its experience with the Armenian side.