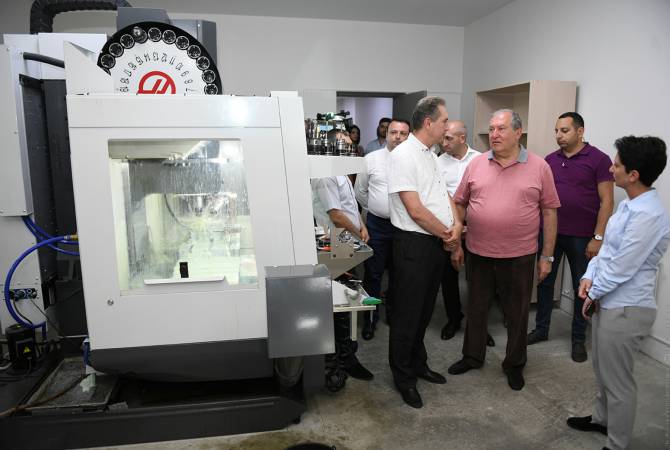 
YEREVAN, JULY 22, ARMENPRESS. On the sidelines of his working visit in Lori province President of Armenia Armen Sarkissian was hosted at the Vanadzor Technology Center where he got acquainted with the activity of the Center, the Presidential Office told Armenpress.

Director of the Center Patvakan Hakhinyan said the Center aims at creating a favorable business climate for the technological companies. The Center assists the startup companies, the technological teams to turn their ideas into a successful business. Starting from 2016 nearly 30 teams participated in the acceleration programs of the Center. The next activity direction relates to the development of professional capacities. Various programming courses for people of all age groups, starting from 10-year-old children, are being organized in the Center.

President Sarkissian toured the Center, talked to the children attending the classes and then met with the representatives of companies located in the Center talking about their activities and answering to their questions.

The President urged them to think in a broader way: “My call to you is the following: Think Big! The smaller we think, the smaller will develop. And therefore, we will just exist, but will not win. This is very important”, he said. “Think big in your creative life, don’t afraid of facing problems which seem difficult or cannot be overcome, try to solve them”, the President said, stating that in the 21st century the world is changing rapidly.

He also urged them to walk in line with these changes and create such a production that will be competitive in the world.

“In order to be competitive we must have the best production. We have its model in agriculture, we have hi-tech – the brandy. We make brandy from the same grape, which is nothing more than the hi-tech of grape juice. In other words, if we should develop something somewhere, it should at least be like the Armenian brandy. If we are developing hi-tech here, it should be at the level of the best artificial intelligence”, the President said. “In order to achieve this we need to pass a path together, and the state also should assist. We need to pass this path quickly, and here one of the main issues is education”.

The President noted that being engaged in science and technologies is important and interesting, urging the youth to love and be satisfied from the work they do.