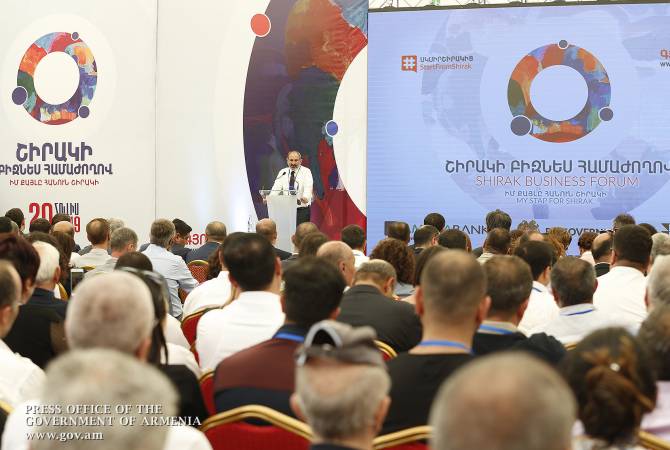 
YEREVAN, JULY 20, ARMENPRESS. Prime Minister of Armenia Nikol Pashinyan participated in ''My step for Shirak'' economic forum in Gyumri on July 20. The PM first toured in the expo-exhibition opened in the sidelines of the forum, got acquainted with the productions of companies in Shirak Province.

As ARMENPRESS was informed fom the Office of the Prime Minister of Armenia, greeting the participants of the forum, Nikol Pashinyan noted that the event is a good chance to speak about the conceptual approaches of the economic policy of the Government one year after the famous developments.

The PM said that at this stage they have already managed to make an important step by carrying out amendments in the tax code, emphasizing that by the new tax code they established a new business layer, called microbusiness and starting from January 1, 2020 companies engaged in some particular activities with annual turnover under 24 million AMD will be exempted from all types of taxes. Besides, the people employed in those companies will not pay 23% profit tax as other do, but just 5000 AMD. ''We attach great importance to this for fostering business activities among our citizens. This is the support of the Government to the citizens of Armenia and a call addressed to them to finally carry out some activities, and we see this policy as a very important tool for overcoming poverty'', PM Pashinyan said, underlining that micro business will be in the center of the Government's attention.

The Prime Minister  also referred to the incidents in Ijevan, emphasizing that the Government will never compromise on any illegal activity and assessed surprising all the opinions that the Government takes tough measures to stop it, since they provide their families by illegal logging.

''I cannot understand this way of thinking. I am sorry but the traffic police officer who used to take 1000 AMD bribe he also provided his family», Pashinyan said, adding that the Government has created enough opportunities for the people to honsetly earn money.

PM Pashinyan emphasized that the overcoming the current economic situation of Armenia will not be based on micro business. ''Our country must be an industrial country. In the near future we will focus in developing any type of industry'', Pashinyan said, underling the importance that people give preference to local production. ''Unfortunately, our local production is small and even a small support can have a significant result'', Pashinyan said, adding that today wears clothes of exclusively Armenian production and the tie is the only exception.

''I once said that like the industrial areas, enterprises turned into commercial territories during the past 30 years, in the same way during the upcoming 30 years the fairs must transform into industrial and production areas and the Republic of Armenia must restore its has-been glory of an industrial country'', Pashinyan said.