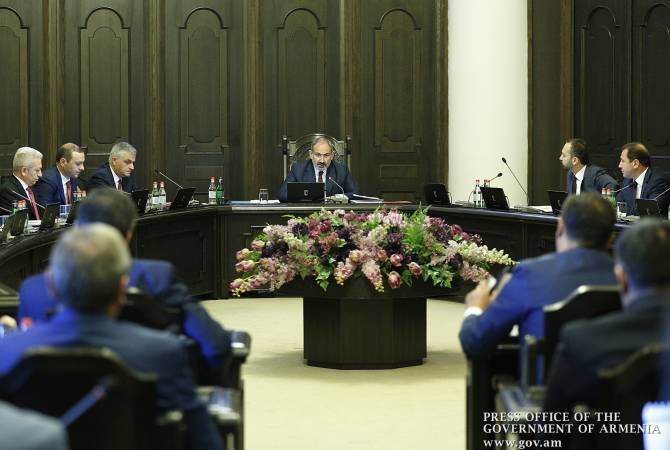 As ARMENPRESS was informed from the Office of the Prime Ministe rof Armenia, Nikol Pashinyan touched upon the situation around Lake Sevan. Environment Minister Eric Grigoryan said that the situation is quite good, and the index of water transparency in Sevan is better than last year: it is 6.5 cm higher. Note that this indicator averaged 2 cm in 2018-2019. So, the indicators are quite good in terms of quality.

The Premier asked the Deputy Health Minister whether it was safe to swim in Lake Sevan and inquired about the findings of water samples taken from the lake. Anahit Avanesyan reported that samples were taken from 11 different sites as of July 15, and only two samples showed small deviations from the norm, which testifies that the lake has good dynamics of self-purification, and swimming is safe in the lake. She noted that samples are being taken on a regular basis, and the Ministry of Health will make a statement, if there are any deviations from the norm. The Head of Government told those responsible to continue taking samples from two different spots to make sure that swimming is safe in the lake and provide relevant information to citizens.

Amending the law On the State Budget of the Republic of Armenia for 2019, the Government allocated 105,000.0 thousand drams to the Tourism Committee of the Ministry of Economy with a view to developing tourism infrastructure and implementing the projected marketing policy. Economy Minister Tigran Khachatryan noted that this is one of the opportunities created as a result of over-fulfillment of budget receipts, and the allocation of additional 105 million drams will almost double the amount envisaged in the 2019 State budget for boosting the country’s attractiveness and promoting incoming tourism. According to the Minister, it is planned to carry out work in 2 directions for 105 million drams: 15 million drams will be allocated for implementation of two standard design works: regional road stations meeting the minimum functional requirements, as well as in areas adjacent to well-known tourist destinations / buildings. An environment will be created that meets all the necessary criteria. And 90 million drams will be spent for marketing purposes in key foreign markets - Russia, Georgia and China. The Minister of Economy advised that the number of visitors rose by 12.8% in the first six months of 2019.

With reference to tourism indicators, the Prime Minister stated as follows: “Two days ago I wrote on my Facebook page that the volume of incoming visits had increased by 14.4%, based on data available from the electronic border control information system. In the meantime, we understand that foreigners do not always come for tourism purposes: they may also arrive on business trips. Not that bad, if either the number of business trips has increased in this period. I am stating this to leave no room for any misunderstandings or misinterpretations caused by mismatch of figures.”

The meeting amended a government decision passed on 12 May, 2016. The amendment seeks to improve the applicable legislation and facilitate the process of granting work permits to foreign nationals.