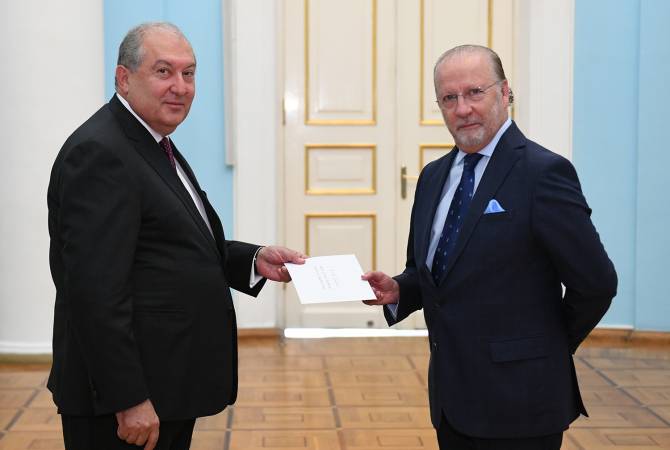 The President said the friendly relations of the Armenian and Spanish peoples, who bear ancient cultural and Christian value system, have a centuries-old history and emphasized the need to intensify efforts to strengthen the mutually beneficial ties and develop the cooperation in different areas.

In his turn the Spanish Ambassador said he is happy to represent Spain in Armenia, noting that during his activities he met with Armenians almost everywhere and has a very warm attitude towards them.

The Ambassador said his activity will be directed for making Armenia and Spain more mutually recognizable through their cultures, histories and investment opportunities, as well as contributing to establishing active business ties.

The sides specifically highlighted the great cooperation potential in tourism sector, stating that Armenians and Spanish people can discover a lot for themselves both in Armenia and Spain. The partnership in high technologies was also considered as prospective according to the meeting participants.

19:30, 01.14.2022
Viewed 1618 times Russian MFA issues statement on the results of the meeting between the special representatives of Armenia, Turkey