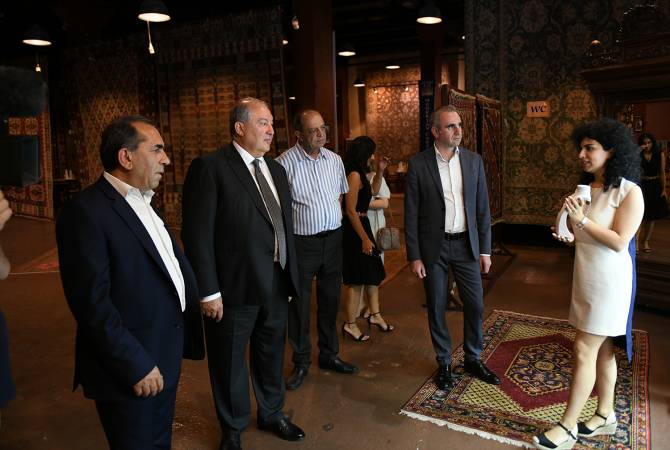 
YEREVAN, JULY 15, ARMENPRESS. President of Armenia Armen Sarkissian on July 15 visited the Megerian Carpet where he was introduced on the history of the company presenting the Armenian carpet art in different countries of the world, the President’s Office told Armenpress.

The Megerian Carpet started its activities in Armenia in 2000. It’s a prominent Armenian carpet and rug producing company.

President Sarkissian visited the carpet-making hall, was interested in the works of carpet-makers and followed the process. The President also visited the Museum of Ancient Carpets named after Hovhannes and Noyemi Mergerians which present the brightest and richest exhibits of ancient Armenian traditional carpet-making.

President Sarkissian got acquainted with the exhibits and history of ancient carpets of various regions of Armenia, Artsakh, as well as Western Armenia.

The Megerian Carpet representatives introduced the President on the company’s ongoing activities and upcoming development programs. The President encouraged them to carry out activities also in Gyumri.