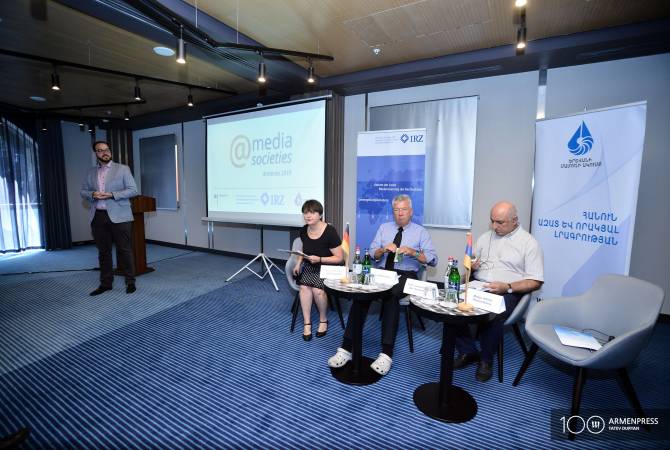 During the conference a number of issues relating to the transparency of media outlets, good governance, journalism ethnics, media legislation were discussed.

Klaus Wendelberger, Deputy Head of the German Mission in Armenia, talked about the pluralism of the Armenian media.

“After the velvet revolution I can state that transparency is really high in the Armenian media. Today journalists are free, and there is plenty of pluralism”, Klaus Wendelberger said.

Amalia Wuckert, program manager at the IRZ, expressed confidence that the conference will succeed and they will be able to work well.

President of the Yerevan Press Club Boris Navasardyan said they are just starting cooperation with the IRZ, expressing hope that it would be effective. He stated that today there are many interesting events for improving the media field, and the Armenian media outlets have started to work in a more transparent way.

Constitutional law and media expert Thomas Wierny said they plan to create a legal base for raising the responsibility of local media outlets. “The program will be implemented until December 2019. Master classes, conferences and seminars will be held within the framework of the program in coming months. They will be carried out by German specialists. The program aims at creating new mechanisms for the Armenian media outlets, increasing their transparency, regulating the issues related to freedom of speech, as well as creating democratic and independent media outlets”, he said.