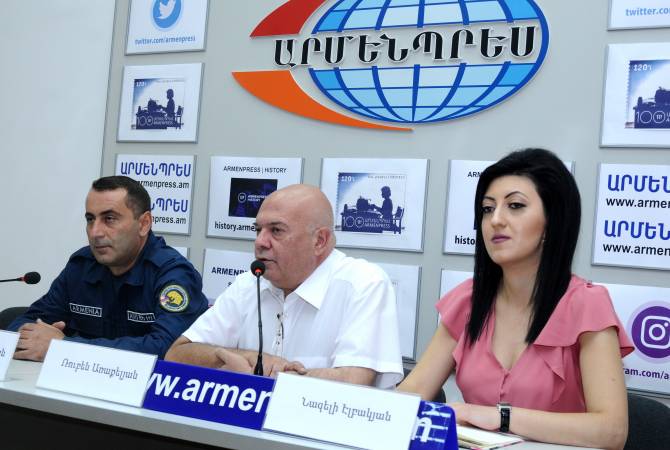 
YEREVAN, JULY 1, ARMENPRESS. The first group of Armenian specialists who departed for Syria on a humanitarian mission successfully completed their works and returned to Armenia, Director of the Center for Humanitarian Demining and Expertise Ruben Arakelyan told a press conference in ARMENPRESS, summing up the works carried out by the group in Syria.

“The first group launched the works in February. The group included de-miners, doctors and the protecting group of the military police which aimed at ensuring the security of the group members from the possible sabotage incidents or similar other cases”, Ruben Arakelyan said.

The humanitarian group got acquainted with the mining fields. Some technical explorations have been carried out jointly with the local population and the Syrian authorities. Based on the examination results, 5 dangerous areas have been detected in Aleppo province, a total of 1 million 315 thousand square meters.

“First of all, those territories near the settlements should have been demined in order to avoid human losses. The first group of Armenian de-miners has cleared a total of 34.690 square meters of territory”, Ruben Arakelyan said, adding that the explosion works of mines have been carried out by the specialists of the Syrian armed forces. Arakelyan assesses the activities of the group as sufficient, given the fact that this mission is new and there was a need to solve logistic problems during the mission. Ruben Arakelyan stated that the second group has more favorable conditions in Syria.

Chief inspector at the Center for Humanitarian Demining and Expertise Ara Martirosyan said the humanitarian de-mining works have been carried out by effectively cooperating with the local and Russian armed forces.

“An analysis of clearing operations has been carried out, and we have worked based on this. The work with the locals is very important for the implementation of humanitarian de-mining. For us, the presence of the Armenian community was very important as we were feeling their support”, he said.

PR manager at the Center Nazeli Elbakyan, who has just returned from Syria, stated that the Armenian community of Syria has welcomed the humanitarian group with a great enthusiasm.

“The same warm welcome was shown by the Syrian people, this is mutual, the bilateral contacts constantly exist. Our doctors were also engaged in the activities of the local medical facilities. Assistance was provided to a large number of children”, she said.

The second humanitarian group from Armenia has departed to Syria on June 16 and will conduct its mission for four months.