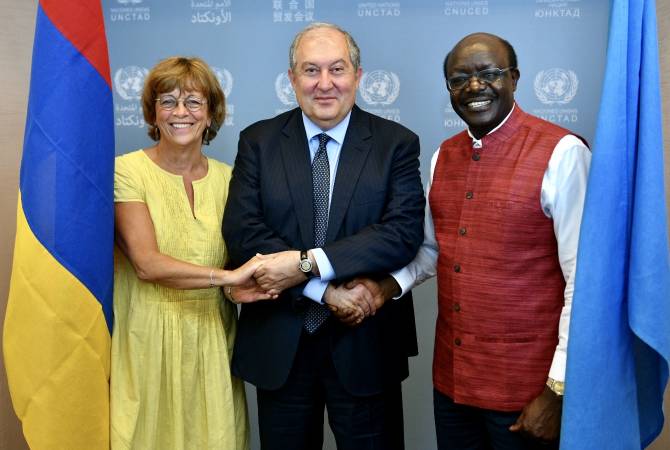 
YEREVAN, JUNE 29, ARMENPRESS. President of Armenia Armen Sarkissian, who is in Switzerland on a working visit, met with Secretary General of the United Nations Conference on Trade and Development (UNCTAD) Mukhisa Kituyi in Geneva.

As ARMENPRESS was informed from the press service of the President's Office, the UNTCD Secretary General thanked President Sarkissian for accepting his invitation and joining the UNCTAD Panel of Eminent Persons. This group of 7 persons gives consultation to the UNCTAD Secretary General over the curent economic challanges, generates ideas aimed at overcoming them.

Noting that the UNCTAD is one of the key isntitutions of the UN, the President of Armenia highly praised the activities of the UN body. He also expressed gratitude to the Conference and personaly Secretary General Mukhisa Kituyi for initiating the preperation of the report on Armenia's investment policy free of charge. Armen Sarkissian highlighted the report also in term of attracting foreign investors. Sarkissian hoped that UNCTAD's recent visit to Armenia will be useful for the report which will be ready in October of this year.