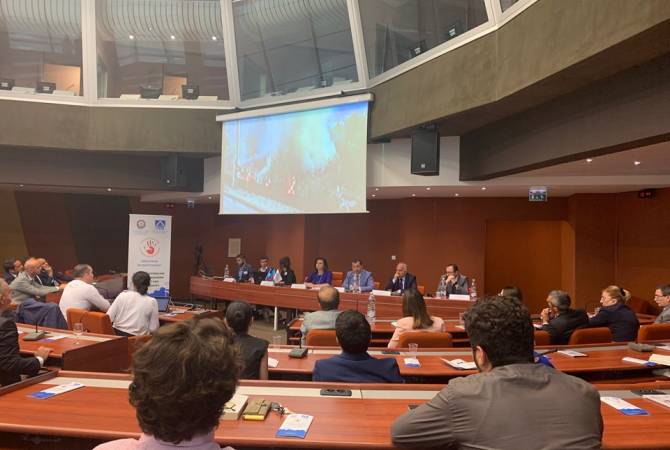 
YEREVAN, JUNE 26, ARMENPRESS. The Armenian delegation to PACE has countered false and deceitful statements made by Azerbaijani delegated during ongoing side-events as part of the organization’s summer session.

“With the participation or initiation of Azerbaijanis two events were organized in PACE, one dedicated to issues of refugees and “internally displaced” in Azerbaijan and another event on the two Azerbaijani saboteurs convicted in Artsakh. Azerbaijani news media were covering both events. I was also present at the events and I have countered the Azerbaijani claims,” Armenia delegate Tatevik Hayrapetyan from the ruling My Step Alliance said on Facebook.

Faud Huseynov, Vice President of the Azerbaijani State Committee for Refugees and Internally Displaced Affairs was also in attendance.

According to Hayrapetyan, Azerbaijan used the platform not to present its policy towards refugees but to carry out propaganda against Armenia.

Hayrapetyan says she and other Armenia delegate Naira Zohrabyan denounced Huseynov’s speech as “false and distorting the essence of the [NK] conflict” and voiced that organizing such evens where only the Azerbaijani side is presented is unacceptable.

During the other event dedicated to the imprisoned saboteur, Azerbaijan attempted to dramatize the situation and brought the son of one of these prisoners. Again, standard accusations and false statements were made against Armenia.

“In the end I requested the floor and noted that this isn’t a “humanitarian” case as the Azerbaijanis are presenting it, but rather a criminal one. I emphasized that such manipulations in the Council of Europe are inadmissible and the attempts or presenting criminals in the humanitarian context are also inadmissible,” she said.

Hayrapetyan then presented to the lawmakers the actions of these saboteurs, who killed two persons, including a minor, and wounded a woman.