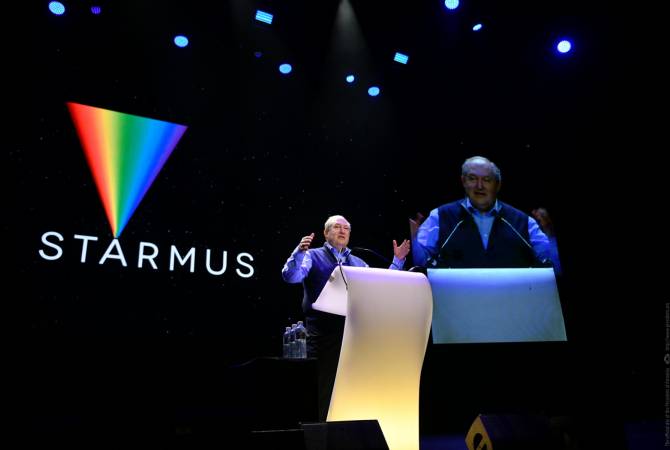 
YEREVAN, JUNE 26, ARMENPRESS. President of Armenia Armen Sarkissian, who is in Switzerland on a working visit, participated in the panel discussions on the sidelines of the STARMUS global festival of science communication and art in Zurich, the Presidential Office told Armenpress.

During the discussions the leading scientists, astronauts, Nobel Prize laureates presented their views on agenda topics. “In order to live completely, we need to learn, discover something new every day, to love and be creative. Every mission starts from dream which later becomes a strategic program, and the latter - a mission for the entire nation. I am confident that we have a mission to make our country a center of technologies, science and education for which all preconditions exist”, the Armenian President said in his remarks.

Within the framework of the Festival, President Sarkissian also met with a number of participants.

Armen Sarkissian met with Director of the Canary Islands Institute of Astrophysics Francisco Sánchez during which the cooperation opportunities with Armenia’s Byurakan Observatory were discussed.

During the meeting with famous Canadian physicist, 2018 Nobel Prize laureate Donna Strickland, the Armenian President talked about the role of science and the current development trends. The sides highlighted the need to encourage and inspire the youth to be engaged in science. As an example, the Armenian President mentioned Donna Strickland’s achievements and considered her contribution to the laser physics as significant.

Following the meetings, the Armenian President answered to the question relating to the significance of the STARMUS festival, stating that this Festival is one of the forms to make science popular and attractive. “STARMUS is a festival where art, science, astronomy, great scientists and musicians act together”, he said. “When you observe the universe, in addition to the scientific value, forms and methods which are used to understand the universe, the latter has another beauty. Therefore, it is also an art and has a unique harmony in some sense which you can also find in music”.

In the context of the topic of scientific-technical development, touching upon the competitiveness between nations, the Armenian President noted in particular: “If a nation has a mission, it gathers all its potential in one place in order to reach that goal. I think one of the goals of our nation must be to become a leading technological and scientific country”. He praised the fact that many children in Armenia want to become programmers. He attached importance to the fact that the youth should understand that engaging in science is not a duty. “They just should enjoy while dealing with science or technologies and at the same time should feel that they are engaged in the most modern, most interesting work which is respected by everyone”, President Sarkissian said.

Once again referring to his proposal-invitation to hold the next STARMUS Festival in Armenia, the President stated that it will be one more opportunity to introduce Armenia to the world community, so that Armenia will become a meeting place of world’s renowned scientists, Nobel Prize winners, musicians. “I hope the 6th STARMUS Festival will also encourage our youth to be engaged not only in music, art, but also in science”, the Armenian President stated.