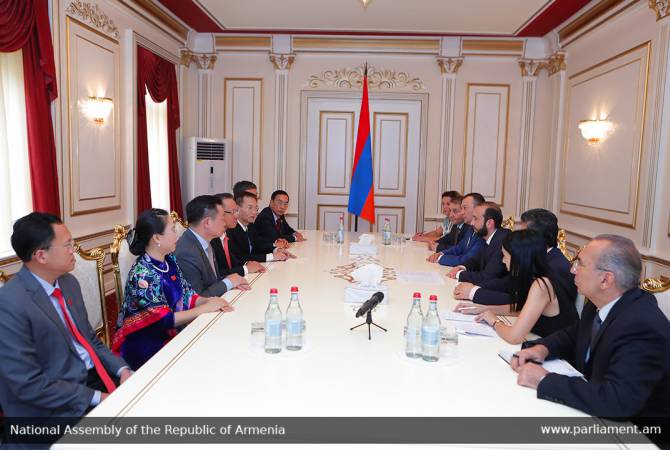 As ARMENPRESS was informed from the press service of teh parliament of Armenia, highlighting the parlaimentary relatons between Armenia and Vietnam, Ararat Mirzoyan hoped that the visit of the parliamentarians will give new impetus to the expansion of partnership between the legislatives of the two countries. According to him, in contrast to parlaimentary relations, bilateral relations in other spheres are not on the desired level given the significant potentil in the spheres of economy, culture, tourism amd many other spheres. The head of the legislative hoped that in the near futurethe Embassy of Vietnam will open in Armenia which will give new impetus to bilateral relations.

Noting that this is the 1st parliamentary delegation of Vietnam to visit Armenia, Nguyen Manh Tien described it as a good evidence of that his country is deeply interested in cooperation with Armenia. ''We salute the relations between the parliaments of the two countries, and we expect that similar mutual visits will give an opportunity to utilize the huge potential in other spheres'', the Vietnamese parliamentarian said.

According to the Vietnamese parliamentarians, they see Armenia as a country that can serve as a bridge linking Asia with Europe, therefore they expect the Armenian side will be actively engaged in a number of regional institutions.

Thanking for the invitation to visit Vietnam, the President of the National Assembly of Armenia emphasized that Armenia is deeply interested in expanding relations with Vietnam and other regional countries. He added that it's time to set to practical steps for deepning the partnership.