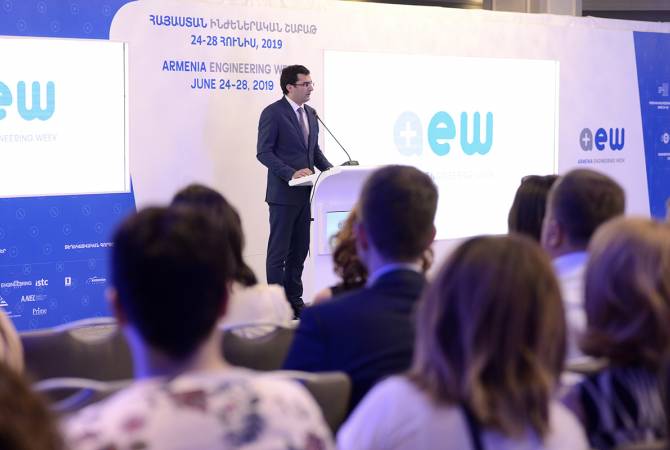 On behalf of the government the minister welcomed the event participants and highlighted holding such an event in Armenia in the context of making it a country of high technological industry.

Minister Arshakyan touched upon the Armenian government’s priorities in the technological sector.

“Armenia’s oil and gas in the 21st century are its infinite human talents and creative mind which are quite developed in our country and have a serious basis. The most urgent issue for the Armenian government is to make Armenia a high technology producing and exporting country. For this purpose a new ministry has been created based on the government’s structural changes, that is the ministry of High Technological Industry.

The world is developing very rapidly and the creative mind and pace move forward the global scientific developments. Countries which are able to take and use innovations, are also able to be presented to the world with a new type of industry, new, fast and flexible systems, as well as management, businessmen’s and state’s cooperation, providing state services for their citizens”, he said.

Touching upon the development of ecosystem, the minister said previously as well major works have been carried out on this direction, and the upcoming works are their logical continuation.

“Armenia should act as a regional center of ecosystem. The Armenian startups have a very great presence in the Silicon Valley and are able to very easily and quickly create ties, enter markets because we have an Armenian Diaspora in the whole world and the Silicon Valley, and these Armenian ties should be used both in major companies and ecosystems. For this purpose programs will be created, and the already existing and developing institutional structures will participate in them this year which will allow to use these ties of the Armenian Diaspora not only to Armenian, but also foreign companies which would like to carry out activities in Armenia”, the minister said.

Summing up his remarks the minister once again welcomed the event participants which arrived in Armenia from different countries of the world, calling on them to use the Armenian talent, the great potential existing in the Armenian companies which today is used around the world, thus contributing to the development of the Armenian ecosystem.