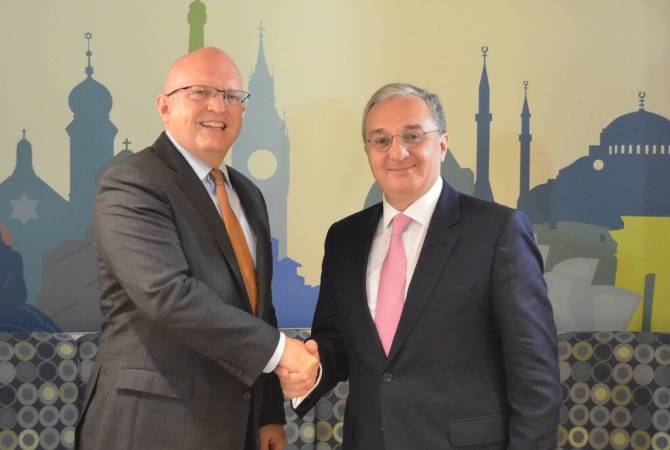 As ARMENPRESS was informed from the press service of the MFA Armenia, the interlocutors discussed a broad range of issues referring to Armenian-U.S. partnership and underlined their mutual readiness to expand and further enrich the agenda of multidimensional cooperation.

Referring to the 1st session of Armenian-U.S. strategic dialogue that took place in Yerevan in May, the Armenian FM saluted it and reaffirmed the commitment of the Armenian side to implement the agreements reached during it.

FM Mnatsakanyan presented to Ambassador Philip Reeker the reform process implemented by the Armenian Government, prioritizing the spheres of the judicial system and the Police. In this context, FM Mnatsakanyan particularly highlighted the support of different international partners and the synchronization and coordination of that support.

During te meeting the sides exchanged views on urgent regional and international issues.

Ahead of the upcoming meeting of the foreign minister of Armenia and Azerbaijan in Washington on June 20, the interlocutors referred to the efforts aimed at the settlment of Nagorno Karabakh conflict in the sidelines of the OSCE Minsk Group Co-chairs.