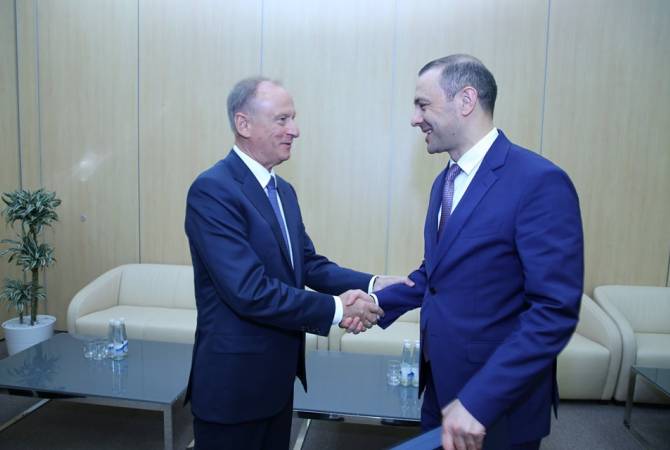 As ARMENPRESS was informed fropm the Security Council of Armenia, Secretary of the Security Council of Armenia Armen Grigoryan highlighted the dynamic development of Armenia-Russian allied relations. Grigoryan also presented the economic reforms crried out in Armenia as a result of which Armenia recorded 7.1% GDP growth in the first quarter of tis year, while economic activity index rose by 9.2% in April. Secretary Grigoryan highligthed the role of Armenians living in Russia and Russians living in Armenia for the development of the Armenian-Russian strategic relations.

Secretary of the Security Council of Russia Nikolai Patrushev highlighted the strategic relations etween Armenia and Russia in the sidelines of the CSTO and the EAEU, as well as bilateral relations.

Nikolai Patrushev once again thanked Armenia for providing humanitarian assistance to the people affected by the Syrian crisis.

The sides emphaiszed the absence of an alternative to the peaceful settkement of Nagorno Karabakh conflict.

The implementation of the cooperation plan between the two Security Council Offices was discussed. The side sgareed to hold the next meeting in August in Yerevan.