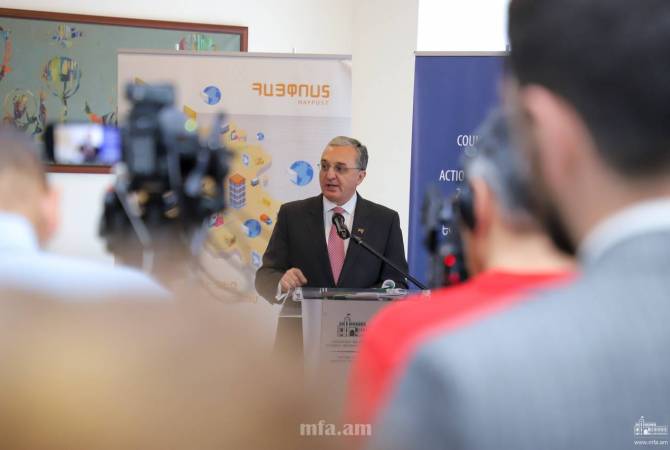 
YEREVAN, JUNE 17, ARMENPRESS. Foreign Minister of Armenia Zohrab Mnatsakanyan delivered opening remarks of the Armenia-Council of Europe Action Plan for 2019-2022. As ARMENPRESS was informed from the press service of the MFA Armenia, Mnatsakanyan particularly said,

Dear members of the Parliament, Mr. Rubinyan and Madam Zohrabyan,

I see a very good turnout from the diplomatic corps, and I am really very grateful that you are here as well, representatives of the civil society are also here. Thank you very much who came here.

It is a great pleasure for me to launch the new Armenia-Council of Europe quadriannual Action Plan. It is an important instrument of our cooperation, it is a good tradition now that we launch this Action Plan with the presence and participation of the Deputy Secretary-General Madam Battaini-Dragoni. It is the third time that we launch this together. And I remember myself personally when we did this 2012.

The positive feedback of our action plan is that it is has been a critical instrument in promoting Armenia's reforms in the fields of criminal justice, penitentiary, local democracy, corruption in higher education and many other fields. This year our mission is higher. This year the budget is quite ambitious. It is 18,9 million euros, and it has a specific focus on those areas of reform which are a priority for our government. Once again I would want to say we have a very good response from the donor community. As of now, we calculated that we have about 57 percent of pledges for the implementation of the Action Plan 2019-2021. And that is an excellent result.

I want to thank all those countries who have come out in strong support of Armenia’s Action Plan. It is, as I am saying, an instrument of reform. These are our reforms, these are not Council of Europe’s reforms. It is not donor community’s reforms. It is our reforms. This is what Armenia needs. And this is what Armenia has shown that it is absolutely serious about the kind of country we want to build. The country, which is modeled according to the European standards, which is thoroughly based on the shared values of democracy, human rights and the rule of law. This is the kind of  country that our public wants. And we have seen that manifestation in April and May, 2018 during the Velvet revolution. This reflects the wishes of our people, and this reflects the determination and commitment of this Government. So, I am absolutely confident that we are practically placed to use this important Action Plan, important instrument of reform to the best of our needs in this country. And that when we take stock in 2021, we say we have tangible results, we have that necessary public trust in this reform process.

I want to specifically outline one important major area of reform, which concerns the judiciary, the truly, genuinely independent, impartial judiciary in Armenia. I will make a point about it. When the Government stepped in, it made it very clear that the Government will do everything to secure that independence and impartiality, that it will do everything to stay away from any pressure on the judiciary. The Government has also not been impressed, putting it mildly, about the kind of oppression that was present in the judiciary from the parts other than the government, and it triggered a political reaction of far three hours of political action. But more importantly it triggered the determination to push forward the reforms without further delay. I want to specifically thank the Secretary General of the Council of Europe Mr. Jagland, because he just picked the phone and call the Prime Minister and said. “We are there, we want to help”. That is the kind of cooperation, that is the meaning of our membership in the Council of Europe. Within one week we had experts, top level experts led by good friend, Mr. Christos Giakoumopoulos, who was here, who set down to work on both the substance of the reform and the financing of the judicial reform. On June 12, the Secretary-General wrote back to the Prime Minister Pashinyan in which he reconfirmed all the agreements and that we are now down to work.

Now we will be adjusting, doing all the necessary adjustments in the action plan as well, so that we make sure we can move forward with the reforms without delay. So that specific point I wanted to make to show the value of this cooperation, the meaning of membership in the Council of Europe.

I want to thank you once again for this very quick response. For us, the completion of the judicial reform, truly independent, impartial reform, makes the whole philosophy of the revolution complete. So that is where we are today.

My other point concerns the 70th anniversary of the Council of Europe. This is a very important family for us, a family of nations who stand together in this notion of shared values. It is a pan-European institution. It is an institution of which we have been a member since 2001 and we have seen the benefits of our membership, in times good and bad. We have had a good opportunity to celebrate the 70th anniversary together with other partners. I also want to specifically outline the importance of our partnership with European Union and its member states who have been very strong supporter of our cooperation, including within the Council of Europe, cooperation for the Armenain reforms. You know, I just came back from the Second Partnership Council in Brussels last week. Some of my colleagues are here who were there together with me. And over there, again, we have heard very strong support to Armenia’s reforms, again also with the use of the strong expertise of the Council of Europe. And in our bilateral relations with many members of the European Union and the Council of Europe, we have this continuous dialogue, and I, once again, want to outline the deep appreciation of Armenia.

We will do one very important thing today. We will cancel the stamps. We will mark the 70th anniversary of CoE by issuing a stamp from the Haypost which marks our appreciation today for the Organization and celebration of this important date.

Thank you very much and a warm welcome”.