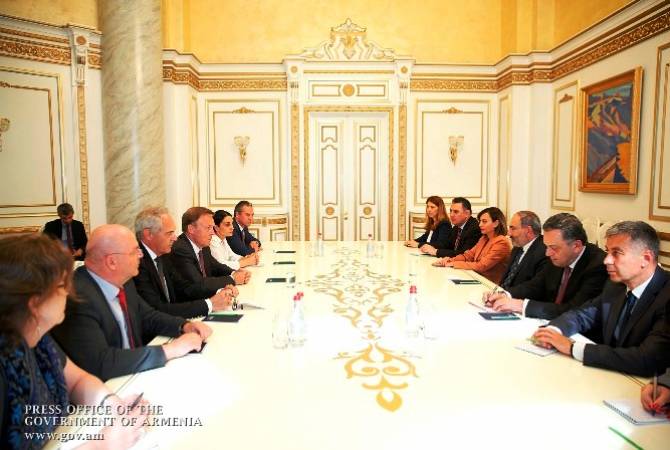 As ARMENPRESS was informed from the Office of the Prime Minister of Armenia, the PM welcomed the visit of Thomas Oppermann to Armenia, noting that it's a very good opportunity to continue the dialogue of future development of Armenian-German relations, which has become quite intensive in the recent period. Nikol Pashinyan recalled that during the last one year he and German Chancellor Angela Merkel paid mutual visits, President of the National Assembly of Armenia paid a visit to Germany and the President of the Constitutional Court of Germany visited Armenia. The Head of the Executive highlighted bilateral cooperation in various spheres and emphasized particularly the cooperation in the sphere of the judicial system in this period. ''Judicial reforms are of key importance for us. For finalizing the democratic changes in our country it is necessary to have a judicial system that will enjoy public trust'', the PM said, adding that Armenia closely cooperates with the EU and the CoE in that direction. Nikol Pashinyan expressed conviction that with the support of the European partners the Government will succeed in those efforts.

According to the Vice President of the German Bundestag, the developments in Armenia are of major interest among the European community. ''Particularly, the Germans have a great sympathy towards the changes in Armenia, and hope that Armenia will be successful. We want to see your country a progressive country and will do everything to assist Armenia. The Armenian Government is on the right path to judicial reforms, since it's impossible to make achievements without independent judicial system'', Thomas Oppermann said.

During the meeting the sides also referred to Nagorno Karabakh conflict settlement process. Nikol Pashinyan and Thomas Oppermann highlighted the peaceful settlement of the conflict and respecting the ceasefire regime, assessing it inadmissible the recent escalation on the contact line. PM Pashinyan underlined the importance of implementing the agreement of the Vienna summit in 2016 on creating mechanisms investigating ceasefire regime violation cases.

The Vice President of the Bundestag expressed conviction that the atmosphere of mutual confidence will give a constructive nature to the negotiations and lead to de-escalation of situation.

PM Pashinyan assessed the full participation of all the sides in the negotiation process a key precondition for the settlement of the conflict.