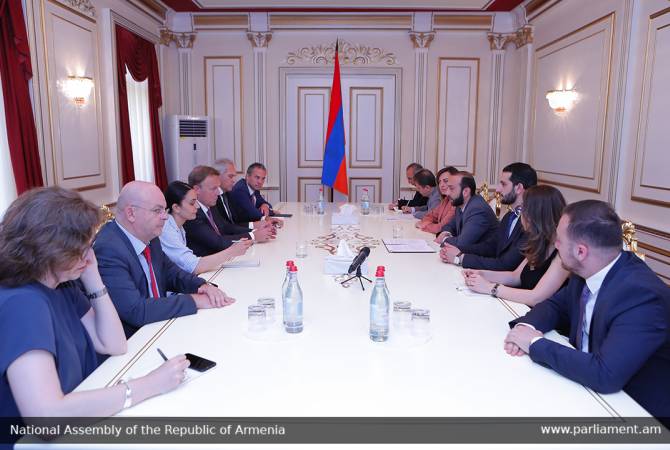 
YEREVAN, JUNE 14, ARMENPRESS. On June 14, Speaker of Parliament of Armenia Ararat Mirzoyan received the delegation headed by Vice President of the Bundestag of the Federal Republic of Germany Thomas Oppermann, the Parliament told Armenpress.

Welcoming the guests in the Armenian Parliament the Speaker expressed hope that the current visit would give new impetus to the dynamically developing relations between the two countries. According to Ararat Mirzoyan, his official visit paid recently to the FRG, as well as the meetings between the high ranking leaders of the two countries will fill in the agenda of Armenia-Germany relations with numerous new programs. The Head of the Parliament highlighted from the agenda the inter-parliamentary active cooperation in different formats, which would be of continuous character.

Speaker Mirzoyan has expressed his gratitude to the German side for the efforts directed to the ratification of the EU-Armenia Comprehensive and Enhanced Partnership Agreement, expecting that in its implementation phase Germany also has an active role. In this context Ararat Mirzoyan touched upon the Armenian citizens’ problem of the EU entry visa liberalization, recording that the time for taking practical steps had ripened.

Thanking for the warm reception Thomas Oppermann has distinguished three circumstances that condition the interest of Germany in deepening the relations with Armenia: the Resolution of the Bundestag adopted in 2016 on the crimes committees towards Armenians in the Ottoman Empire in 1915, the velvet revolution in Armenia which had its positive response in Europe and the visit of the FRG Chancellor Angela Merkel to Yerevan. “We show great admiration towards Armenia, and we are ready to strengthen the bilateral relations,” the Vice President of the Bundestag said.

The President of the National Assembly has presented to the guests the reforms which go on and will be implemented in the most different spheres. “We are resolute for consistently developing the democratic values and democracy will not have regress among us,” Ararat Mirzoyan noted.

The Head of the Parliament has evaluated the adoption of the Resolution recognizing the Armenian Genocide by the FRG Bundestag, underlining that by only recognizing and condemning such crimes it will be possible to prevent the crimes directed to mankind.

The Speaker expressed readiness of the Armenian side to continue having contribution to the processes in the international security, particularly touching upon the effective cooperation of the Armenian peacekeepers in Afghanistan with the German commanders.

Informing that the visit of the FRG Bundestag delegation is regional, Thomas Oppermann has noted that one of their goals is to get acquainted with the sides’ approaches for the solution of the existing conflicts and promote the establishment of the dialogue and the atmosphere of peace.

“We should look at all existing conflicts in the world in terms of protection of human rights. The right of the people’s free living should not be conditioned by any political aspirations of any power,” the Head of the Parliament said. According to him, the bellicose rhetoric sounding in Azerbaijan nullifies the international negotiating efforts.

The parties also referred to the perspectives of bilateral and multilateral cooperation, emphasized the further enlivening of the inter-parliamentary ties and the regional cooperation of the two countries.