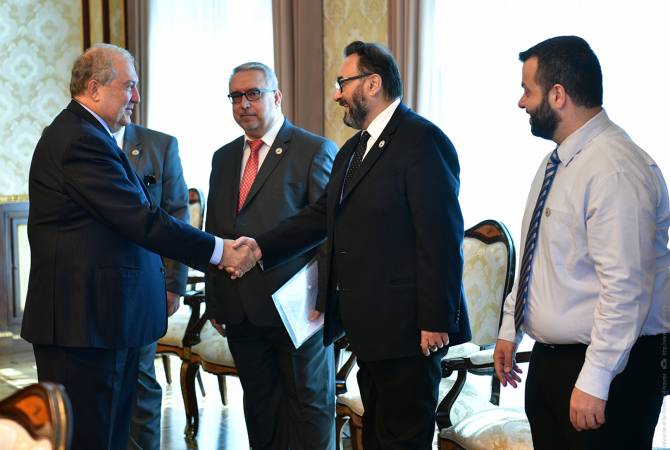 
YEREVAN, JUNE 14, ARMENPRESS. President of Armenia Armen Sarkissian hosted the representatives of the Union of Graduates of the St. Gregory the Illuminator seminary of Beirut who are in Armenia to hold the meeting of the administrative body, the Presidential Office told Armenpress.

The guests introduced the Union’s programs and plans. They informed that one of their goals is to commemorate the 100th anniversary of former director of the seminary Sahak Keshishyan.

Welcoming their plan President Sarkissian proposed to assist any educational facility in Gyumri that needs support, given the fact that Sahak Keshishyan has also carried out spiritual and cultural activity in Gyumri in the past. “The best values which have been created and which we have, we should transfer them to the next generation. It’s not a coincidence that Father Sahak has concentrated his attention on Gyumri. It has been our historical, educational and cultural center and should continue to remain so”, the Armenian President said.

The guests accepted the proposal with readiness, as well as introduced their other initiatives dedicated to the memory of Sahak Keshishyan.