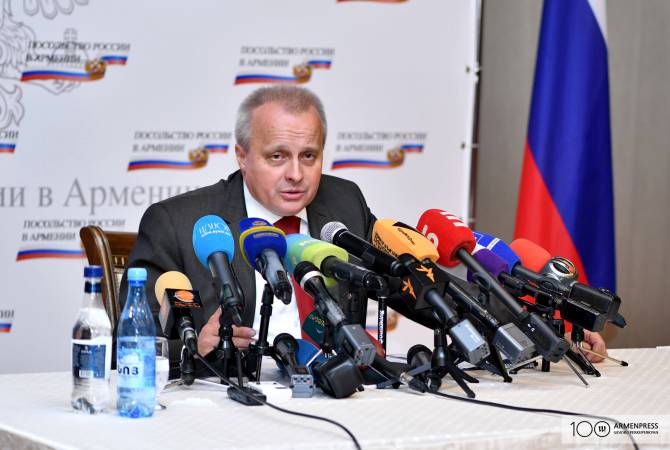 
YEREVAN, JUNE 11, ARMENPRESS. Russia remains committed to its position according to which the Nagorno Karabakh conflict should be solved without escalation, Russian Ambassador to Armenia Sergei Kopyrkin told reporters during today’s press conference in Yerevan.

“Russia plays an important and significant role in the Nagorno Karabakh conflict settlement process based on the relations which link it with Armenia as a strategic partner, and with Azerbaijan which is our old partner. We are acting within the OSCE Minsk Group Co-Chairmanship format. We take both joint actions with our partners and separate steps on this matter. These mechanisms exist and work. Russia continues keeping its position. We are in favor of absence of escalation and take actions on this path which we can do. We want a negotiation process to be established. It’s clear that the final decision for solving the issue will belong to the conflicting sides, and here we should have a balanced approach to Russia’s role, it’s important, but cannot affect the decisions of the parties”, he said.

The OSCE Minsk Group Co-Chairmanship is the only mediation format dealing with the settlement of the Nagorno Karabakh conflict. The Co-Chair countries are Russia, US and France.