Russia stood, stands and will stand with Armenia – Ambassador 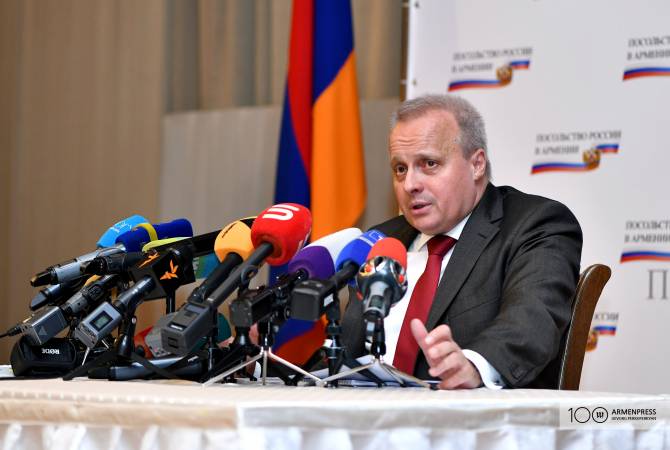 “Continuation has been maintained in our relations a year after the famous domestic political changes in Armenia, this is perhaps the most important. They are steadily developing, are on a high level and bear a strategic partnership nature. At the same time these relations are developing and getting adapted to the new problems, new realities and demands. Regular contacts at high levels are taking place. If we talk about the past half a year, following our last press conference meetings were held between the two leaders – Vladimir Putin and Nikol Pashinyan, in Moscow on December 27 and recently on the sidelines of the St. Petersburg International Economic Forum on June 6. Meetings were held between the Armenian Prime Minister and Prime Minister of Russia Dmitry Medvedev in Moscow on January 25 and April 29-30 on the sidelines of the EAEU Inter-governmental council session in Yerevan”, the Russian Ambassador told reporters today.

He also praised the fact that the inter-governmental and inter-parliamentary relations are also stable and continuous.

“Another fact is also important that following the December 2018 snap parliamentary elections of Armenia the parliaments of the two states immediately established relations continuing the tradition of a very important inter-parliamentary partnership”, he said.

Ambassador Kopyrkin said Armenians are wise people who can solve the country’s current problems, and Russia has stood, stands and will stand with Armenia.