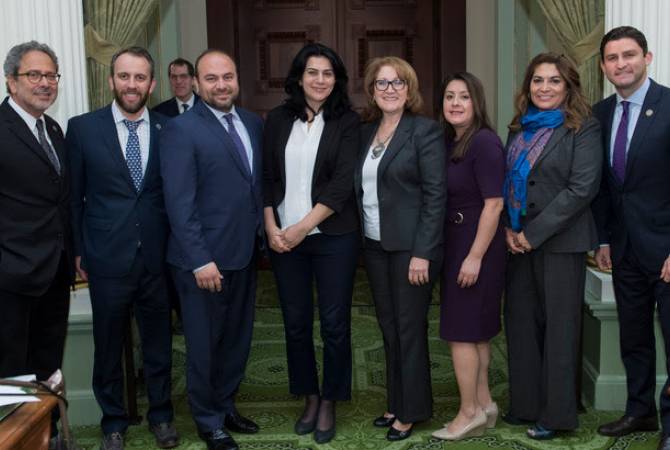 
YEREVAN, MAY 24, ARMENPRESS. Deputy Foreign Minister of the Republic of Artsakh Armine Alexanyan was in California on May 13-19, invited to participate in the ‘Innovate Armenia’ Festival organized by the Institute of Armenian Studies of the University of Southern California (USA), ARMENPRESS was informed from the press service of the Foreign Ministry of Artsakh.

During the event, the Deputy Foreign Minister delivered a speech, touching upon the independent state building in Artsakh, the achievements in the processes of international recognition and decentralized cooperation of the Republic, as well as the foreign policy challenges.

In the sidelines of the festival, a meeting with member of Los Angeles City Council Paul Krekorian took place. The sides discussed a range of issues related to the cooperation between Los Angeles and Shushi sister cities.

During the visit, the Deputy Foreign Minister had meetings with members of the Armenian Students’ Association at the University of California, Los Angeles (UCLA), the staff of ‘Asbarez’ daily, representatives of the Armenian Bar Association of America, as well as the leadership of the Young Men’s Christian Association (YMCA) of Los Angeles. Issues related to the strengthening of Artsakh-Diaspora ties, as well as the prospects of development of the international cooperation of Artsakh’s civil society were discussed.

In the framework of the visit Armine Alexanyan visited capital city of the state of California Sacramento. Meetings with Speaker of the California State Assembly Anthony Randon, Assembly member Adrin Nazarian and representatives of the California Committees on Emergency Situations, Climate Change, Agriculture and Food took place in the State Assembly. Deputy Foreign Minister Armine Alexanyan had also a separate meeting with Senator Anthony Portantino. During the meetings, the sides touched upon the current state of relations between California and Artsakh and noted the importance of expanding the cooperation in different spheres. An exchange of opinions on the implementation of some new joint projects took place.