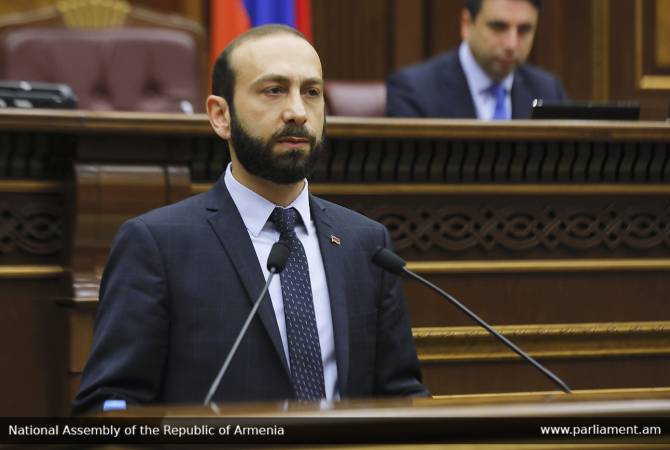 
YEREVAN, MAY 24, ARMENPRESS. The goal of transitional justice is the establishment of independent judicial system. It’s not aimed at further exacerbating the existing problems, but giving solutions and lead to public solidarity, President of the Nationbal Assembly of Armenia Ararat Mirzoyan said during the parliamentary hearing on transitional justice, entitled “The Perspectives in the Application of Transitional Justice Instruments in Armenia”.

As ARMENPRESS was informed from the press service of the parliament of Armenia, Mirzoyan thanked the participants of the hearing for such a representative participation, noting that the issue is one of the most debated topics of the public in the recent days.

Referring to the issues that are most frequently raised, including what is transitional justice, what are its tools and to what extent is it necessary to apply in Armenia, Ararat Mirzoyan said, “First, it’s necessary to understand why the existing judicial system cannot meet the demands of the citizens of Armenia to ensure justice that will not be questioned and why we should apply the instruments of transitional justice. It’s a fact for all of us, it’s not a secret that the judicial system has accumulated serious problems throughout years , which not only have not been solved during the past one year, but have become a challenge for us and stand on the path of future democratic development of Armenia like a great rock”, Mirzoyan said, adding that it’s impossible to have a full democracy when courts are unable to ensure justice based on the Constitution and laws of Armenia.

“And in this transitional stage, when Armenia is on the path from pseudo-democracy, or as some experts say, from authoritarianism to democracy, when the people finally formed the legislative power which established the executive power, the judicial system continues living according to the rules of the past”, the President of the parliament said, emphasizing that the Armenian public has no trust towards the judicial system, which means that it’s time to carry our serious and prompt actions.

Ararat Mirzoyan said that he shares the opinion of the international experts referring to the period of applying transitional justice, which is that if transitional justice should be applied, this is the best moment for it and it shouldn’t be done earlier, in haste, and the opposite, there should be no delays.

Ararat Mirzoyan highlighted correctly assessing the extent of using the toolkits of transitional justice, since under or over-use of it can lead to other undesired consequences.

At the end of the speech President of the National Assembly Ararat Mirzoyan once again thanked the participants of the parliamentary hearing, adding that there will be reports and expert assessments after which people who have something to say, will have the opportunity to do it. Mirzoyan hoped that finally they will reach concrete conclusions.