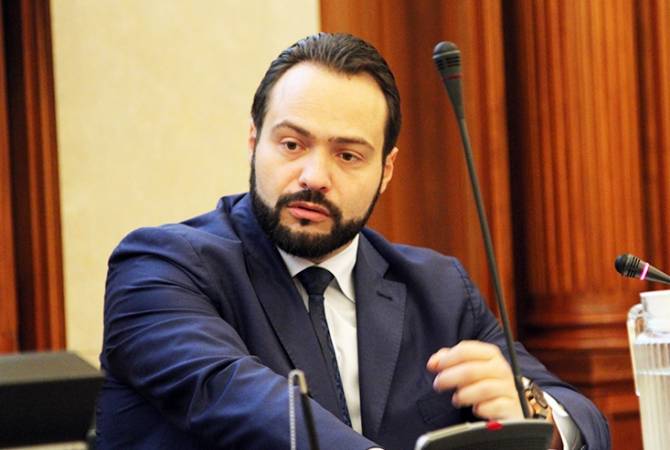 
YEREVAN, MAY 24, ARMENPRESS. Representative of Italy’s parliamentary majority Fabio Massimo Castaldo, who is also the Vice President of the European Parliament, has announced that he is proud of his contribution to the Armenian Genocide recognition by the Italian parliament. In a meeting with the Lebanese community in Rome he noted that “Five Star Movement”, which has the majority seats in the legislative, is the initiator of Armenian Genocide condemnation by the Chamber of Deputies of Italy and the call addressed to the Government to recognize it, as well as raising the necessity of giving an international importance to the issue. According to him, in the past the authorities of Italy attached more importance to relations with Turkey and Azerbaijan rather than justice, but the majority political force in the legislative now is committed to the policy of condemning the Armenian Genocide and demanding Turkey to recognize it.

“We will be heard also at the European Parliament in raising the just cause of the Armenian people”, ARMENPRESS reports Fabio Massimo as saying.

The Chamber of Deputies (lower house of parliament) of Italy adopted a Resolution on April 10 calling on the Government to “officially recognize the Armenian Genocide” and give an international assessment to the issue. The Resolution was adopted with 382 votes in favor, 0 against and 43 abstentions.

In 2000 the Italian Chamber of Deputies adopted a resolution calling on the government to pursue the weakening of the tensions between the peoples and minorities in the region, with the aim of creating conditions for the peaceful coexistence and human rights protection. In this regard, the assessment was more general and did not contain a message on the recognition of the Armenian Genocide.

The decision of April 10, 2019 has a targeted address. It calls on the Italian government to officially recognize the Armenian Genocide and give it an international importance.