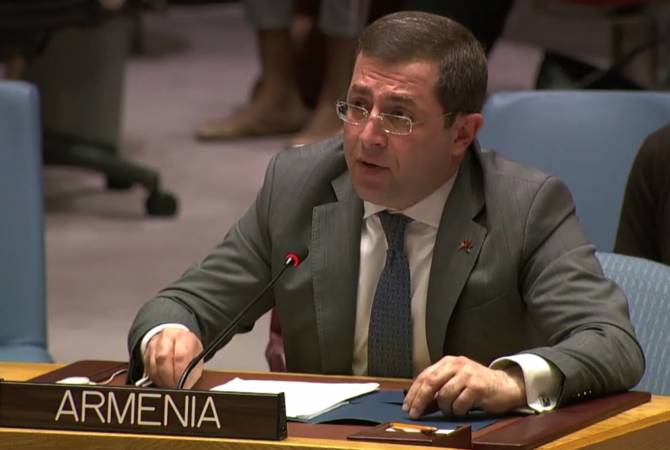 
YEREVAN, MAY 24, ARMENPRESS. On May 23, Permanent Representative of Armenia to the United Nations Mher Margaryan participated in the United Nations Security Council open debate on “Protection of civilians in armed conflicts”, the Armenian foreign ministry told Armenpress.

Presided by Indonesia's Foreign Minister Retno Marsudi the meeting was attended by more than 80 delegations. UN Secretary General Antonio Guterres and President of the International Committee of the Red Cross Peter Maurer delivered reports on protection of civilian population, especially women and children, in armed conflicts.

Touching upon the role of women in sustainable peace efforts, the Permanent Representative Armenia highlighted the "Women for Peace" initiative led by the spouse of the Armenian Prime Minister as an important example of women's involvement in peacebuilding activities.

In response to the distortions made earlier by the representative of Azerbaijan referring to Armenia, Mher Margaryan stressed the importance of upholding the agreements signed between Nagorno Karabakh, Azerbaijan and Armenia on the cessation of hostilities in 1994/95. The Permanent Representative of Armenia drew the Security Council's attention to cases of violation of international humanitarian law by Azerbaijan, in particular, to crimes against civilians committed by Azerbaijani armed forces during the large-scale military aggression against Nagorno-Karabakh in April 2016.

The Permanent Representative of Armenia welcomed the continued support of the United Nations and of the Secretary General rendered to the OSCE Minsk Group Co-Chairmanship in the peaceful settlement of the Nagorno-Karabakh conflict.