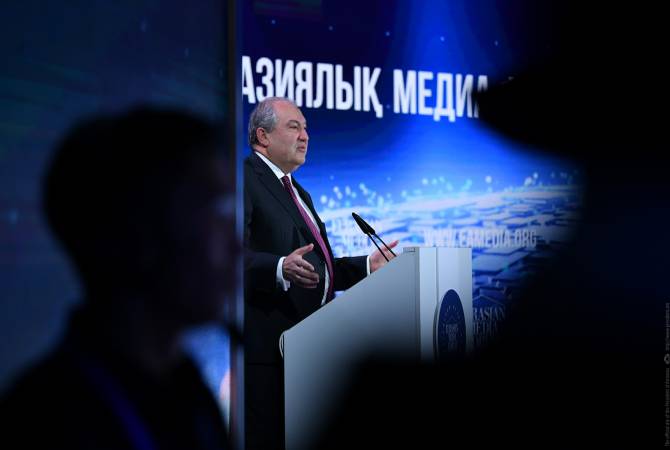 The annual Forum, which this year is being held under the title ‘The World Today: Transforming Reality?’, has gathered over 600 delegates from 60 countries of the world, including politicians, economists, Nobel Prize winners, businessmen and experts.

Armenian President Armen Sarkissian has been one of the co-founders of the Eurasian Media Forum.

Kazakhstan’s President Kassym-Jomart Tokayev, Chairwoman of the Federation Council of the Russian Federal Assembly Valentina Matviyenko and the Almaty Mayor delivered welcoming remarks at the Forum.

The Armenian President congratulated the participants on the launch of the Forum. He said he played a role in the creation of the Forum in early 2000s. “I can call this Forum as an institute that greatly affects not only the journalistic environment, but also the Eurasianism concept and the whole media in general. When I think about the Eurasian Media Forum, of course, two-three ideas, concepts come to my mind. The first one is called Eurasia. What is Eurasia? It is not only a geography, but also is the great history of civilizations born millennia ago. Some of them didn’t survive to our times, but some today became really powerful civilizations”, the President said, adding that today Eurasia is the center of the great development and events taking place in the world.

“When we talk about Eurasia, we also should think about Kazakhstan because today it is located just in the center not only physically, but also politically and economically. It is no coincidence that the ideas on economic cooperation were born here which became a reality in the post-Soviet region. The Eurasian economic cooperation has become a reality, which, we hope, will become another bridge to serve the main goal we think of. It is the mutual friendship of peoples, cultures and civilizations. And I want to see the day when the Eurasian economic cooperation and the European Union will launch serious talks on deep partnership”, the Armenian President said.

Armen Sarkissian also touched upon the second concept – the media, stating that the idea of media has undergone many changes in the past year. “When we were talking about a media forum in the past, that forum was viewed as a platform for journalists. But look how media has changed within 20 years. Now when we say media, we don’t think about reporters only. I think that the future of the Eurasian Media Forum is the real media, the virtual life we live. Each of us spend several hours, some even more hours in the virtual space which has become much more comprehensive, than just the news, journalism or report of information. This is a part of our life. This is the small tool or production of the industrial revolution which includes information about our life, economic relations, our photos, family and our financial relations with banks”, Mr. Sarkissian said, noting that this virtual life changes people’s perception on different phenomena.

“The role of media, virtual space has a great impact on how the civilization, the ideas are born and become a reality. The media, which we started 20 years ago, is no longer the previous one. This media is the second virtual world we live in. It more and more affects the real life we live in physically, and in some sense they are being merged. Many important human values, including those on how we react to this universe, the democracy, will also change. We should be ready to the world we are going to have 20 years later”, he said.

And as a third concept, he touched upon the Forum and thanked its organizers, in particular, Dariga Nazarbayeva and the Kazakh government. “Of course, the forum is the people who established it. I want to thank you all and those who created this Forum, wishing to all of us that the Forum continues long because the problems we and the humanity face are huge and change every day”, the Armenian President said.