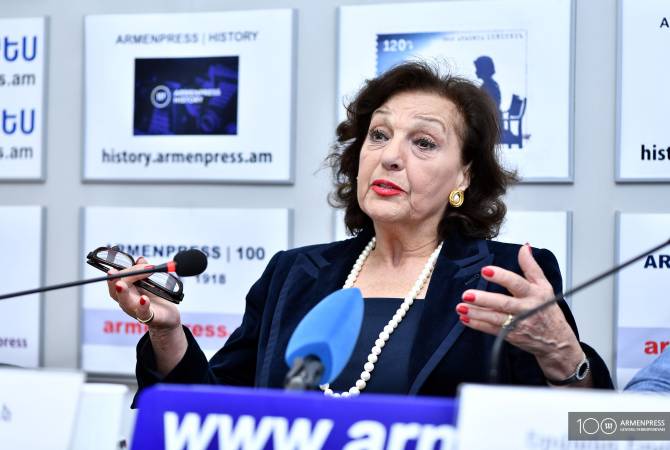 
YEREVAN, MAY 22, ARMENPRESS. French-Armenian legend Rosy Armen will soon perform a live concert in Yerevan dedicated to her 60 years on stage.

Rosy Hovhannessian was born in Paris, France on May 1, 1939. She has been singing since the age of four, when she would lead the youth orchestra of her school until she eventually started singing solo songs. She later took the stage name Rosy Armen (Armenian Rose in French), and reached international fame.

The upcoming May 25 milestone concert will be performed jointly with The Symphonic and Variety Orchestra of the Public Radio of Armenia.

Speaking at a press conference in Yerevan, Symphonic and Variety Orchestra of the Public Radio of Armenia Artistic Director Yervand Yerznkyan said Rosy Armen will sing more than 20 songs from different times of her career.

“When I was offered to organize Rosy Armen’s concert, I got very happy,” Yerznkyan said.

Armen, who was also in attendance at the news conference, said the concert will feature also new songs, as well as duets. She said she is very excited, because she hasn’t performed in Armenia for many years.

Rosy Armen’s first ever visit to Armenia was in 1965, when she delivered a highly successful concert.

At that time, she met and became friends with the renowned Armenian composer and pianist Arno Babajanian.

The last time Rosy Armen performed in Armenia was in 1991.

“It was after the earthquake, it was a difficult situation for Armenia. Today, I look at the changes with great admiration, now Armenia is very different. After my last concert new generations have come, perhaps many aren’t well familiar with my art. I am awaiting the concert with excitement. Although I am on stage for 60 years, along with gaining experience each time when I climb up the stage the excitement grows, the audience is becoming more picky, right?” said Armen.

Speaking about her life and career, Rosy Armen said she had a journey full of success and difficulties. The maestro says at some point she understood that family is what matters.

“When I once returned from a concert tour, I approached my little son to hug him, he went away as if he didn’t recognize me. I realized that I must be next to my family. I decided to temporarily leave the stage. Years later I underwent surgery and I was still not singing. Then, my sons, one of whom is a musician, and their friends encouraged me, supported and I returned to stage, which I am happy about,” Rosy Armen said.

Rosy Armen, 80, says she is a happy person and she continues dreaming and pursuing goals.

She even has future planned concerts in Georgia, USA and other countries.

After the 1988 earthquake in Armenia, Charles Aznavour invited her to record alongside him and other singers the song "Pour toi Arménie", a song that remained in 1st place for 10 weeks in a row in the French Top 50.

Rosy Armen received further recognition with "International Music Award" at the Moscow Kremlin, for singing in the countries of the world in different languages including Armenian.

During MIDEM 2015 in Cannes, Rosy Armen received the Legion of Honor from the hands of the President of Armenia, Serzh Sargsyan.