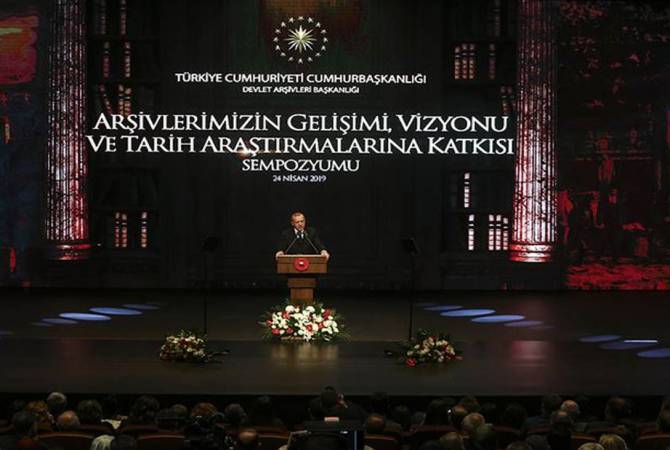 
YEREVAN, MAY 22, ARMENPRESS. The Federation of Armenian Organisations in the Netherlands (FAON) has rejected Foreign Minister Stef Blok's lax response to the call from the House of Representatives to condemn the unacceptable words about the Armenian Genocide by Turkish president Erdogan on 24 April 2019, the commemoration day of the Armenian Genocide, Armenpress reports citing FAON website.

During the debate in the Chamber on 15 May 2019 on the situation in Turkey, the minister was urged by various factions to condemn the inadmissible denial practices by Turkish President Erdogan, who stated that “the relocation of the Armenian gangs and their supporters, who massacred the Muslim people, was the most reasonable action that could be taken in such a period”.

Minister Blok dismissed these urgent questions about, in his words, "the issue of the Armenian Genocide", by saying that he will not respond each time to what other people say.

The FAON believes that the trivialising responses of the Minister are an evidence of a far-reaching and dangerous political opportunism. In the discussions, the Minister had to answer several times the question about the method used not only to restore the relations with Turkey but also expand them. The question has also been raised if it wouldn’t be naïve to hope that by increasing trade relations, it will be possible to achieve improvements in the rule of law in Turkey.

In a speech at a symposium on national archives and historical research and in a tweet on 24 April 2019, President Erdogan raged in unprecedented ways, suggesting that the Turkish archives uncover the truth about history. He spoke in terms of "Armenian gangs killing Muslims", making the deportations of the Armenians "the most reasonable action". He also addressed France full of hatred, where this year 24 April was declared a national day of commemoration of the Armenian Genocide.

Alteration and denial of the facts around the Armenian Genocide have been at the heart of Turkey's denial policy for decades. Like the Dutch government, many have presumed to show a positive development trough vague statements about ''compassion with Armenians'' from Turkey, but the recent comments show not only that the policy of denial has not changed, but as well that Erdogan will not hesitate to spread hate over the backs of innocent victims. This is a dangerous and unacceptable fact. In fact, a start should be made finally to face the black pages in history.

In the Netherlands, the Armenian community tries to keep the memory of the victims of the Armenian genocide alive in a peaceful and dignified manner. The Turkish community is taken into account here, and where possible it is involved, such as at the national commemoration on 24 April 2019 in Assen, where the Armenian genocide monument also involved a joint wreath laying of Armenian, Turkish and Kurdish youth.

At the resumption of diplomatic relations between Turkey and the Netherlands, Minister Blok recently spoke about the many pillars on which they rest. It was assumed that the Netherlands would strongly condemn the flagrant denial in the aforementioned judgments and that Turkey would be challenged.

The FAON points out that in 2004 the House of Representatives had already instructed the government to put the recognition of the Armenian Genocide on the agenda in negotiations with Turkey. Also, apart from this motion, an appropriate response is necessary. The Parliament also explicitly recognized the Armenian Genocide in later rulings, such as in February 2018 with the virtually unanimous adoption of Motion by MP Voordewind. This is a moment when the government cannot remain silent. Even in the mistaken view of the government, that the government could not legally use the term genocide, which is strongly criticized by FAON, the Netherlands, which advocates international law, cannot remain silent. Silence is equivalent to consent!