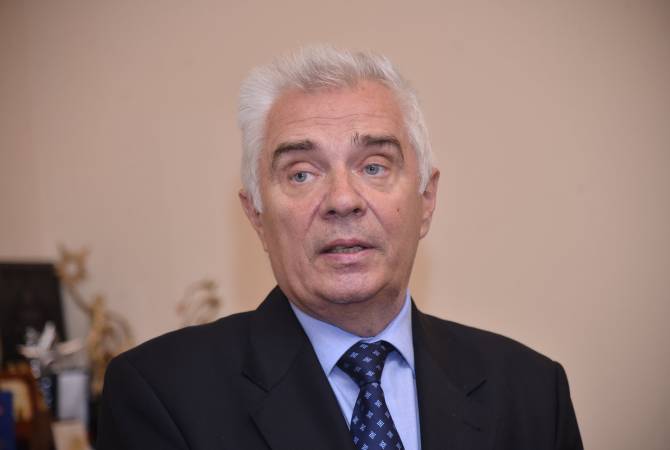 
YEREVAN, MAY 21, ARMENPRESS. The EU assesses the May 20 announcment of Armenian PM Nikol Pashinyan about the judical system of the country as a firm committmenet for carrying out reforms,  Head of the EU delegation in Armenia, Ambassador Piotr Świtalski told the reporters.

''We have not had the opportunity to discuss the issue in detail with the Government or the Justice Ministry of Armenia or other people. Anyway, as an announcement as a political act, I think what the PM said is very understandable for us'', Świtalski said, adding that it's very clear and firm commitment to carry out reforms in the justice system.

''Today the Justice Minister talked about vetting, presenting the example of Albania. As you may know, the EU closely cooperted with the government of Albania, developing the so-called Albanian model and today this vetting model is supported by the EU. This is something the Armenian side could take into account'', ARMENPRESS reports Świtalski as saying.

The EU Ambassador emphasized that the EU believes the reforms in the justice sphere of Armenia ore of vital importance for the future. ''I can say that deep and comprehensive reforms in the justice sphere are of significant importance for your future for a number of reasons, but the first reason is that the Armenian people do not trust the courts. Last year the EU financially supported the independent researches, that documented that extremely many Armenians do not trust the courts'', Świtalski said, underlining the necessity of reforms to restore public trust.

Piotr Świtalski also emphasized that the reforms should be carried out in line with the Constitution and respecting Armenia's international obligations.

Piotr Świtalski added that he can once again officially present the following position, ''We are ready to support Armenia in implementing deep and comprehensive reforms in justice sphere by providing technical or consultative support and quite large financial support. We intensively support the obligations assumed by the Prime Minister to carry out reforms in justice sphere. This is an extremely serious commitment. We never enforce anything, but the Government of Armenia should know that it can rely on our support during the implementation of those reforms based on the mentioned principles''.

To the question why Armenian people do not trust the courts, the Head of the EU delegation said, ''The two main reasons are the following – corruption and the political dependence of courts. This is the official position of the EU''.