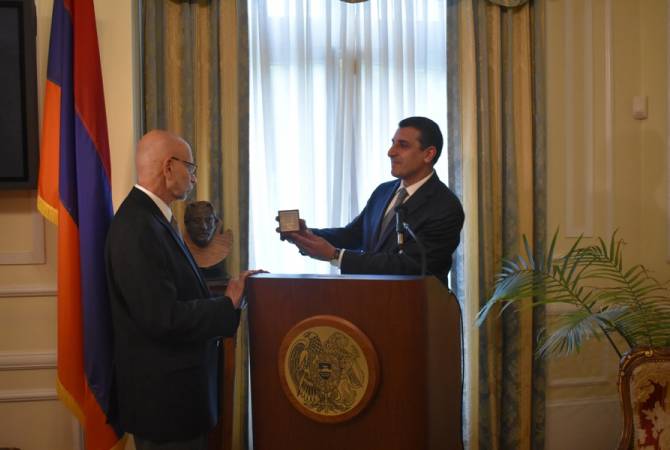 
YEREVAN, MAY 21, ARMENPRESS. On May 16 the Embassy of Armenia to the US hosted a reception in recognition of Dr. Levon Avdoyan, longtime Armenia and Georgia Area specialist at the African and Middle Eastern Division of the Library of Congress, upon his retirement, following a distinguished career spanning over 4 decades at the Library, the Armenian MFA told Armenpress.

The event was co-organized by the Society for Armenian Studies – a scholarly organization, founded in 1974 and dedicated to the development of Armenian studies as an academic discipline and the promotion of the study of Armenian culture and society.

The event was attended by distinguished scholars, representing various U.S. and international institutions, including Dr. Mary-Jane Deeb, former longtime Chief of the African and Middle Eastern Division at the Library of Congress, former U.S. Ambassadors to Armenia Michael Lemmon and John Evans, diplomats from the Embassy of Georgia, representatives of Armenian-American organizations and members of the Armenian community. During the event Dr. Levon Avdoyan received the inaugural “Lifetime Achievement” Award from Dr. Bedross Der Matossian, President of the Society for Armenian Studies.

In his remarks Ambassador Varuzhan Nersesyan acknowledged Dr. Avdoyan’s contribution to the field of Armenian studies and his innumerous scholarly accomplishments and thanked him for his longtime service in his important position. The Ambassador especially highlighted Dr. Avdoyan’s efforts in putting together a number of crucial projects throughout his career, including the 2012 exhibition on the 500th anniversary of the first Armenian printed book, the Vardanants Day Lectures on various topics of Armenian studies, support during the 2018 Smithsonian Folklife Festival, and the extensive social media program to popularize the Armenian collection of the Library.