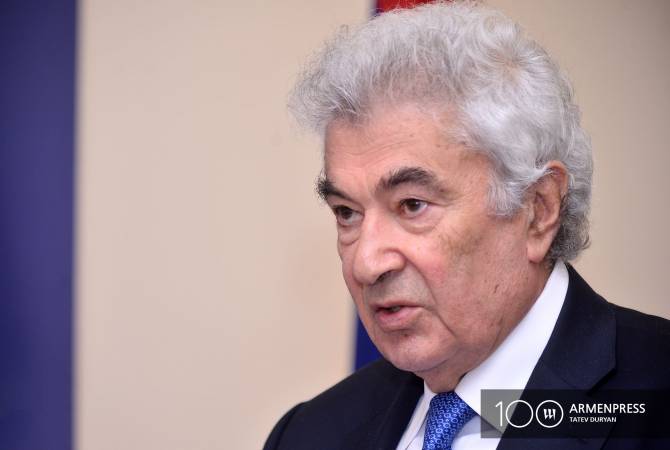 
YEREVAN, MAY 21, ARMENPRESS. President of the Supreme Judicial Council of Armenia Gagik Harutyunyan says the qualitative reforms in the judiciary have long been an agenda issue in the country, which have been thoroughly covered in their annual report, and the one-year activity of the Supreme Judicial Council has been completely directed for that. Harutyunyan says during this short and difficult period serious results have also been recorded both in terms of detecting the situation, developing strategic directions for the development of effective justice and etc.

-Mr. Harutyunyan, you didn’t attend the May 20 consultation convened in the government, but what will say about the discussion results?

-The reasons for not participating in the consultation are just technical and I don’t consider necessary to make a comment in this regard.

But as for the problem in general, I would like to state that the qualitative reforms in the country’s judiciary have long been an agenda issue, which we have thoroughly touched upon in our annual report, and the one-year activity of the Supreme Judicial Council has been completely directed for that. During this short and difficult period serious results have also been recorded both in the matters of detecting the situation, developing strategic directions for the development of effective justice and etc.

Our principled approach is that the systematic reforms, as a matter of pan-national priority, should be carried out by the effective use of constitutional tools, creation of necessary legislative guarantees and respective systematic and procedural steps.

-But today the talk is about surgical interventions

-We have never ruled out this direction. But we believed and continue believing that the choice of surgical approach also must be constitutional, should not lead to violation of human rights, devastating consequences and should serve for the establishment of the rule of law.

-But don’t you think that its implementation format and ways are also important?

-Of course, they are also important. There is no need to mention all respective articles of the Constitution and the Judicial Code, as well as Armenia’s international commitments, but we should record that any unlawful actions insulting the human and professional dignity can become a dangerous precedent full of numerous negative consequences.

-Can you, please, specify the three key approaches for effectively solving the issue?

-I, perhaps, would mention the followings:

Firstly, the creation of necessary and sufficient guarantees for the full functioning of judiciary and the structural, procedural, material and social independence of effective functioning should be a priority issue in Armenia. Secondly, the solution of objective issues cannot be left aside, giving the priority to subjective and situational approaches. Thirdly, the legal actions aimed at making judicial reforms cannot be taken without clearly developed conceptual approaches and their legal provision, over which both the Council and I personally have presented multiple complex proposals.