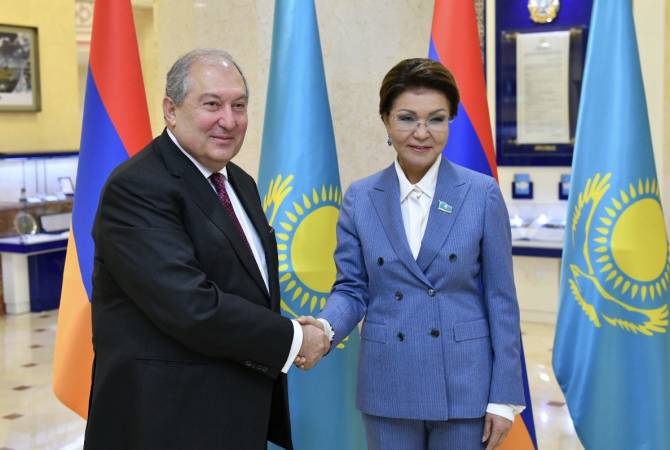 
YEREVAN, MAY 20, ARMENPRESS. President of Armenia Armen Sarkissiam met with chairwoman of the Upper house (Senate) of the Parliament of Kazakhstan Dariga Nazarbayeva in Nur-Sultan, the Presidential Office told Armenpress.

During the meeting issues on deepening the mutual partnership between the parliaments of the two states, as well as developing the relations in economic, cultural and humanitarian areas were discussed.

Dariga Nazarbayeva thanked the Armenian President for the participation to the upcoming Eurasian Media Forum and the support to holding the Forum. “You have done a lot for the promotion of this Forum in Western media domain”, she said.

Dariga Nazarbayeva informed that they want to expand the cooperation with the Armenian Parliament and fully utilize the entire potential of parliamentary friendship groups.

The sides also talked about the prospective directions of cooperation between the two states. President Armen Sarkissian said there is a great potential to deepen the bilateral ties and mutual partnership. “The volume of current partnership is very small and is not in accordance with the existing potential and the relations of the two friendly countries that are in the same economic zone”, the Armenian President said. He in particular highlighted the development of cooperation in the fields of IT, artificial intelligence and food safety.

President Sarkissian touched upon the current domestic political situation in Armenia. He stated that the Armenian people have wisdom to overcome problems and pass through a new development path without shocks.