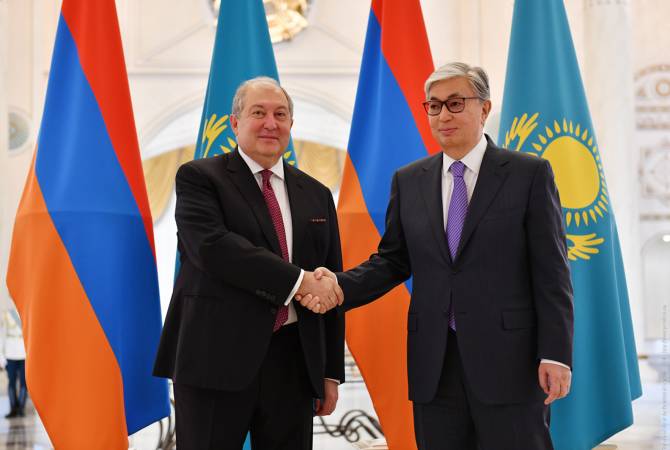 During the meeting the Kazakh President thanked President Armen Sarkissian for accepting the invitation to participate in the 12th annual economic forum which this year is being held under the name “Inspiring Growth: People, Cities, Economies”.

“Undoubtedly, your participation will make the economic forum more significant. Our countries have friendly and partnering relations, and our first President Nursultan Nazarbayev stands in the origins of this cooperation. He was always paying great attention to the development of cooperation with Armenia, and today we can confidently state that the relations between our countries are on good basis. We are closely cooperating also within the frames of regional and international organizations, such as the UN and CSTO”, the Kazakh President said.

In his turn President Sarkissian thanked for the invitation and stated that he is happy to be in the capital of friendly Kazakhstan, Nur-Sultan, which is named after the first president Nursultan Nazarbayev who had a great contribution to the development of the country and the Armenian-Kazakh relations.

“Our two peoples communicate with each other for centuries. The relations between our states historically have firm roots and are a vivid example of friendship and cooperation. We live in the 21st century which will be greatly different from the 20th century. And in this regard I think that the partnership between Armenia and Kazakhstan can move further both in the economic field, by covering new technologies, as well as in the cultural sector”, the Armenian President said.

The two Presidents also touched upon the bilateral and multilateral cooperation issues, within the frames of the Eurasian Economic Union (EAEU) and CSTO. They highlighted deepening the partnership in commercial, cultural and humanitarian areas.

The Presidents specifically highlighted the role of Kazakhstan’s Armenian community in terms of preserving and developing the friendly relations between the two countries. The Kazakh President praised the Armenian community, stating that they are worthy citizens of Kazakhstan and bring their contribution to the country’s socio-economic development.